Although sautéed and stir-fried dishes do not figure prominently in Japanese cuisine, simple dishes in that category will appear on the tables of most Japanese homes.

The scale, however, is much more diminutive than most Chinese, and certainly most Americans, would expect.

Historically, oil was fairly expensive in Japan, and a typical farming family might have gotten away with a single modestly-sized bottle of vegetable oil over the course of an entire year, even in the era of cast-iron pots. A tiny bottle of toasted sesame oil, mostly used a few drops at a time, might provide a flavor boost to otherwise simple dishes. 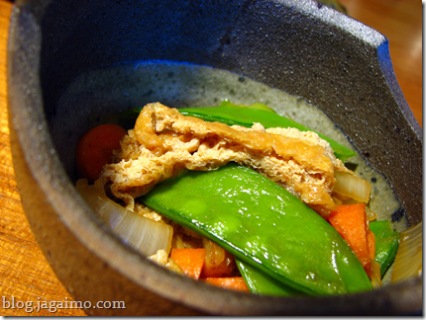 Itamemono, or pan-sautéed dishes, generally have a fairly subtle flavor. Even soy sauce is used with a very light hand. Dishes do not acquire the "red" color of Chinese-style stir-fried dishes.

This type of dish is best with a short list of ingredients, prepared in small batches; I don't think I made this with much more than 1 to 1 1/2 cups of raw ingredients, and it was enough for two or three Japanese servings along with other dishes. My tiniest omelet pan did the trick. For a group of four or five people, you could get away with making a larger quantity in a 10" skillet.

I used some snow peas (sayaendō), carrots prepared with a simple rolling cut, and onions. I dunked some abura-age (tofu puffs, perhaps) in very hot water and squeezed the water out to prepare it for the pan. This helps the aburaage more readily absorb salt and seasonings, and coincidentally slightly reduces the oil content.

This kind of sauté is done with very little oil at a fairly high temperature. I add a small pinch of salt every time I put a new ingredient in the pan, then finish with some soy sauce, sake, and mirin.

Japan doesn't have the French convention of caramelizing onions, but if you bring the onions just past translucent they'll add a great aroma and natural complexity to the flavor of the dish. Add the carrots, cook for a minute or two longer, then add the snow peas and aburaage. Once these are a bit shiny, add a small splash of soy sauce, a good tablespoon of sake, and maybe even a little dashijiru, then perhaps one or two drops sesame oil. In some cases you may want to add a touch of sugar or mirin, but I think the onions and carrots are naturally sweet enough that additional sugar is usually unnecessary to achieve an ama-karai (sweet-salty) taste.

Broccoli rabe standing in for Nanohana

Occasionally I've suggested that yu tsai or yu choi can stand in for nanohana, the greens of the rapeseed plant that are widely available in Japan during the springtime.

In fact, though, rapini, also called broccoli rabe, is far more like nanohana than yu choi is, at least in terms of flavor and appearance. Both rapini and nanohana are generally fairly bitter, and both respond well to blanching.

Although the standard rapini treatment in the US seems to involve sauteeing with garlic and olive oil, the bitterness of rapini mellows out considerably after being blanched for about a minute in acidulated, salted walter, then shocked in ice water. So much, in fact, that such rapini actually seems quite mild in comparison to similarly prepared nanohana.

Tonight I decided to take advantage of rapini for two dishes... one is a simple suimono, or clear soup, and the other is aemono, a simply dressed side dish.

Rapini to Shimeji no suimono

For the soup, I prepared my usual konbu-porcini stock and seasoned it with salt, light-color soy sauce (usuguchi shouyu), a bit of sake, and a bit of sugar. This time, I added a tiny bit of katakuriko to give the soup a little body. After tasting the stock, I added some shimeji mushrooms and let them simmer a bit; just a minute or so before serving, I added the blanched rapini to warm it up before serving. 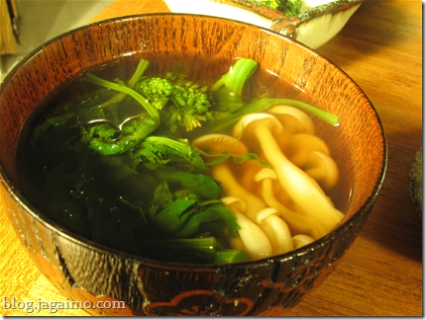 For a cold side dish, I toasted white sesame seeds in a dry pan before grinding them up. I combined the ground sesame with a bit of sugar and salt, added some water and a tiny bit of soy sauce, and briefly boiled the paste to thicken it slightly. Though it's certainly not the standard choice, I added a bit of a syrupy-thick aged balsamic vinegar at the tail end, which adds a hint of complexity that ordinary rice vinegar wouldn't provide. Since the blanching water was slightly acidic from rice vinegar, I also didn't need much vinegar in the gomadare (sesame sauce).

The sauce is simply tossed with the blanched rapini and served in a small bowl. 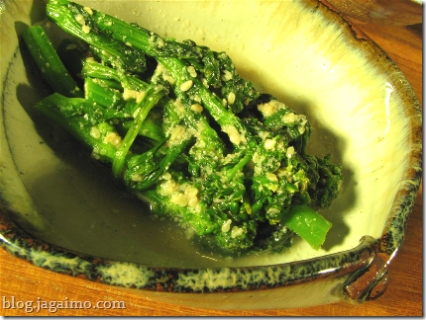 In the US, outside of aromatics like onions and garlic, we often seem to try to avoid serving the same vegetable in two different dishes at the same meal. However, in Japan, I found it was fairly common to do so, especially when something was particularly plentiful and in season.

For American and European cooking, we often serve such large portions that it would become tedious to eat too much of the same ingredient. However, the smaller portions in Japanese cooking make it worth considering, especially if you can think of an interesting textural or flavor contrast for a particular item. In this case, one dish is served hot, and the other cold. One is soupy and mild, and one is slighly salty and has a strong flavor from the sesame sauce.

Both bring out something different in the rapini.

I remember a small Kyoto restaurant run by an interesting obaachan I visited almost 4 years ago... Unprompted, she served a hot variaton of a vegetable side dish my friend and I had previously ordered cold, just to demonstrate that greens can be completely transformed with a slight adjustment in preparation.

Whenever I'm faced with a surplus of a particular ingredient, recalling that moment helps me realize that only a small touch of creative energy can make something familiar and boring into something new and compelling all over again...

I guess I never got around to mentioning that last week I made some godoufu (godofu). It’s been a while since I’ve last done this, but I posted recently on eGullet about it and thought it would be good to revisit it. The pictured godoufu is served after it had only minimally set; it’s in ideal condition after chilling for a few hours. But, alas, hunger won out over flawlessness. I garnished it with some shiso, dressed with some shouyu and konbu-shiitake dashi. There might be a little bit of yuzu zest in there. 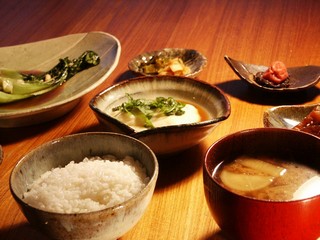 This is most of the spread.

A close-up of my not-quite-fully-set godoufu. When fully set and cut, it looks a little more like a bulging block rather than an amorphous blob. It tastes good either way: creamy with a mochi-like texture. 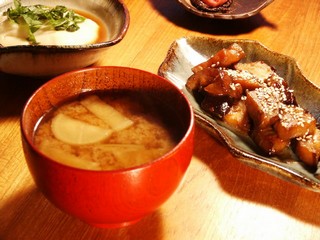 I made misoshiru with daikon and leeks, as well as nasu-no-miso ni. Nasu-no-miso ni is made in many different ways, but it’s basically a braised eggplant dish with miso, usually some mirin, sometimes some sugar. The eggplant is salted and rinsed to remove aku. Sometimes it’s pan-grilled and sometimes it’s deep-fried before simmering with the miso-based sauce. In west Japan it tends to be sweeter; in north Japan it tends to be saltier. Since I was making Arita-style godoufu, I chose to make it a bit sweeter to match the region.

Nasu-no miso-ni is often garnished with sesame seeds (either black or white). It always tastes best on the second day. 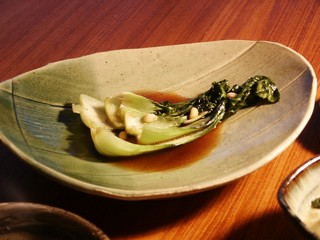 A very basic bok choy no itamemono served with a few raw pine nuts. The sauce is shouyu, mirin and my own dashijiru. This takes less than a minute to prepare.

Some simple sunomono with konbu and Japanese-style kyuuri.

This dinner may look moderately complicated, but the only time-consuming part was the godoufu, which takes about 50 minutes, not counting the chilling time to make it set. If, for example, I had my godoufu and tsukemono ready to go, this dinner could be prepared in its entirety in the time it takes to cook rice.

Individual Japanese dishes are rarely terribly complicated, but the time it takes to prepare Japanese food increases with the number of dishes presented. Fortunately, unlike other cuisines, most Japanese foods can be served lukewarm or chilled; other than soup, usually Japanese only serve one or two hot dishes. A number of simmered foods like nimono improve with rest. Ohitashi (blanched, lightly dressed vegetable dishes) are often served cold.

I didn’t take any photos because it was a fried food and I was hungry, but a few days after I made my godoufu, I was trying to think of a way use up the remainder in a different way than I had tried before. So I cut the remaining godoufu and cut it into modestly-sized cubes, and coated with katakuriko. I deep-fried these cubes at about 375F. I served them in a bowl with some Japanese soy sauce, cold Japanese tea and daikon oroshi, much like agedashi-doufu. I was lazy that day and didn’t have any soup stock handy, but I did have some iced Japanese tea on hand, so I improvised. It worked fairly well.

I hate to compare something that most people have likely never tried with something else that most people have never tried, but it reminded me of tamago no tempura. This is one of the few kinds of food which I find a mystery, but basically tamago no tempura is like a poached egg that has been deep fried with a tempura coating. When I had it in a restaurant in Japan, it still seemed to have a relatively soft yolk, and the basic texture was “fuwa-fuwa” (umm… fluffy?) but with a nice crisp coating. My agegoufu was similar except it had a creamier texture.