On eGullet, someone asked about what to eat in Fukuoka, but most of what I could think of was not particularly special to the city, alas. But it triggered a memory of godoufu (ごどうふ, more likely to be rendered in English as godofu), of which I’m a huge fan.

When I visited Arita on an outing in March 2000, I tried this mochi-like soymilk-based “tofu” in a little restaurant on my way to go ceramics hunting. Served three ways in the picture below: in the center is godoufu with ginger, soy sauce, and possibly some daikon oroshi. On the upper right is a bowl with godoufu, some sea vegetables, and dengaku-miso type topping but still served cold. This might have had some ginger or some ground sesame seeds in it… My memory has subsequently faded. The suimono in the bottom right has a smaller cubes of godoufu, some tamago-yaki, and some fu. The rest is standard teishoku fare; tsukemono on the upper left, chawanmushi below that,  rice, and some mostly vegetable tempura. (Ah, and shiso… mmm).

Godoufu has a nice chewy texture and could easily find its way into both sweet and savory dishes. I think you could serve it with some kuromitsu and kinako to get something approximating soy milk warabi-mochi (豆乳のわらびもち). You could have it replace siratama or mochi in an oshiroko/zenzai (sweet red bean “soup”). It might even be an alternative to the jellies often found at the bottom of cream anmitsu or mitsumame… As is usually best with Japanese foods, simple preparations are likely to be the most impressive.

If you ask the average Japanese person about godoufu, they’ve probably never heard of it. It’s fairly specific to Saga prefecture, though like most regional specialties, through the magic of mail order and perhaps the mura-kara-machi-kara-kan type places, you may have a chance to get this in other parts of Japan. It is completely nonexistent, to my knowledge, in the US.

I have attempted to describe the process to make godoufu. I’ve probably made it about four times successfully, with usually very nice results, save one time when I scorched the bottom of my pan.

I think I have a weekend project ahead of me sometime soon. 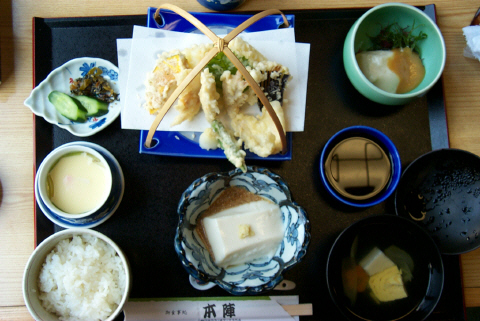