Finding washoku in Hirosaki for lunch was actually suprisingly tough... the streets perpendicular to Hirosaki park were mostly full of meaty youshouku-ya-san and kissaten. Finally we settled into an unremarkable department store restaurant floor, which had three choices.

We both had some sort of soba dish. Mine was a sansai soba, or mountain vegetable topped soba. Usually sansai soba in Kanto is a slightly more elegant looking dish with just a few vegetables on top, but this place used a surprisingly generous amount of vegetables. 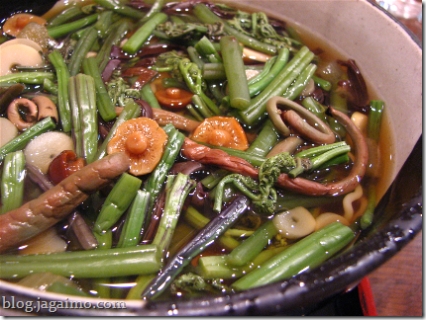 It wasn't the nicest version of this dish I've ever seen. The vegetables probably came in foodservice packs and the soba was a little overcooked. But we were hungry and tired, and this was comforting and warm.

Driven by sunnier weather, we had done our second day of hanami, but we didn't do enough snacking at yatai to feel full. So a couple of orders of noodles helped fill us up.

I also did a little bit of shopping, making my first serious investment in urushi. I really like nurimono, or lacquerware, but I've never really been brave enough to commit to anything beyond some cheap wooden misoshiru bowls and chopsticks. Aomori's style of urushi is very distinctive, and appeals to Hiromi's love for visual drama and my own quirky tastes. I actually have some older chopsticks from Aomori given to me many years ago by a friend, but I bought my first lacquer serving ware and two really nice sake cups... I promise they'll make an appearance on my blog in the future, but I didn't take any photos in the shop.

We headed off to the mountains... 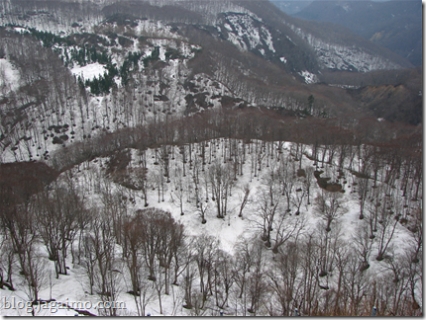 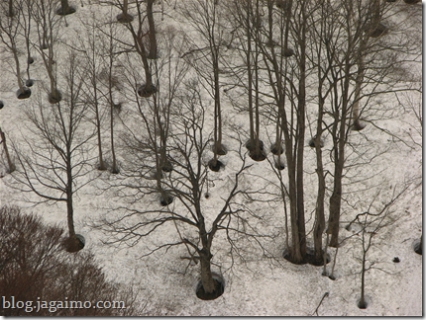 Somehow trees absorb just enough heat from the spring sun to help melt away small circles of the old snow.

We made our way to a tough ski destination... you have to trek your own gear up the slope, as there are no mechanical lifts. Our purpose for making this trek was to go to a hyakunin-buro, 100 person bath, with a highly sulfurous composition. Unlike most onsen in Japan, this hot spring spot has only konyoku buro (gender mixed baths) and has been that way for a very long time.

And unlike most konyoku buro I've been to in Japan, it was also very crowded.

You just pay a a small fee for entry... I think about 600 yen per person ($5-6)... if you're smart, you will come with a couple of towels; we neglected this and had to buy some tiny ones.

Hiromi scoped out the other women to decide whether she'd be brave enough to go with just the small towel as cover... After a demographic analysis, she caved in and bought this sort of bathing suit that loosely covers her body. Most of the women in their 20s or 30s, at least the ones without children, wore something similar; older women and women who came with children in tow concerned themselves less with such modesty, though most draped themselves with a large towel when entering or exiting the baths.

The men, for the most part, used their small towels when moving in and out of the bathing area, and some covered themselves when outside of the baths. It's a strangely communal experience, but I think the experience was so unfamiliar to most contemporary Japanese that I'm sure most people were fairly self-conscious most of the time.

In theory, the baths typically had a male and a female side, but the dividing line wasn't strictly enforced; I think it was just to give people some semblence of separation to create a small suggestion of privacy.

On our way out, we had some warm soba manjuu (buckwheat cake stuffed with sweet red bean paste) and some surprisingly decent sumibi-yaki coffee from the onsen gift shop.

We started heading toward Hachinohe again, where we wanted to get a quick dinner in before taking the long train ride back to Tokyo. In the mountains, plows had dug through several meters of old snow, but the roads were clear... as we headed down toward the base of the mountain again, I snapped a couple of photos, though the snow wasn't nearly as high down below. 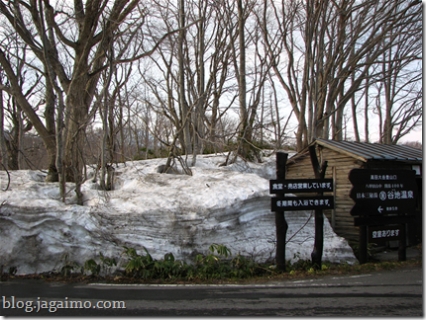 I was probably too sleepy to remember to take pictures up higher, where thick layers of old snow were piled up even higher.

When we got back, we had a slightly rushed meal at a little train station robata-ya. I had packed away my camera in my luggage in the rental car, but we had a few memorable things... Hiromi had senbe-jiru, a soup made with puffed grain senbei and chicken, if I understood correctly; it's a regional specialty. I've kind of lost track of everything we ordered, but it was pleasing... I had a glass of a surprisingly whiskey-like aged shochu made with buckwheat. We also had some good tamago-yaki served like nigiri-zushi, grilled shiitake, and some really nice miso grilled yaki-onigiri. I'm such a sucker for charcoal grilled rice balls, because I can never get them quite right when making them at home on an electric appliance.

Everything was shutting down early that night, including gas stations, but somehow we managed to refuel and return the rental car just in time to make our train back to Tokyo.