Fujiya Hotel has insanely roomy washitsu, or Japanese style rooms. The washitsu, which features tatami flooring, consists of a large dual-purpose room and a smaller one that might sleep a couple of children. But wait, there was more! For those who don't love Japanese-style bedding, or for particularly large parties, two twin beds are available in another chamber off the hallway.

We felt like we could live there... it was probably slightly larger than the weekly apartment where we were staying in Tokyo, and that was one of the roomiest places I've ever rented in Tokyo.

We chose to have a late dinner after a long bath. Both the men's and women's bath offer rotenburo, but the water wasn't especially warm, and it was more comfortable to bathe inside. They also had a sauna room, which I stepped into briefly before realizing I should have taken off my glasses first... I popped into the cold water for a bit and started turning my attention to dinner. 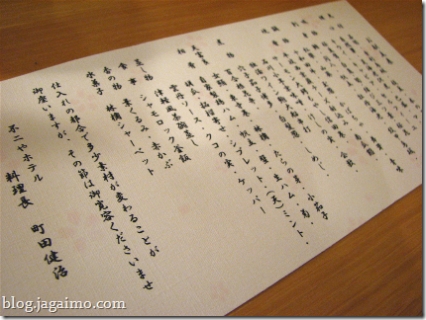 We ate in the hotel's dining room, which meant dinner was a little less intimate, but close to the kitchen, allowing for some surprisingly fresh, well-made food.

This menu reflects Hiromi's meal, and closely parallels my pleasingly customized one. Although 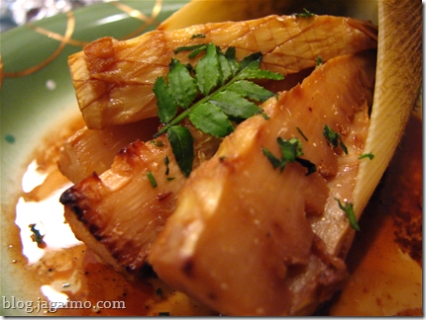 It's springtime, and I had a lot of fantastic grilled bamboo shoot dishes on this trip. But this was far and away the most visually dramatic, and one of the best tasting. I think it's seasoned with little more than salt and soy sauce and perhaps a hint of butter. I really enjoyed it and will be longing for this simple, elegant dish until I can find my way to Japan in springtime again.

The bamboo sprout's skin also decorated a dish made with soramame (fava beans) and potatoes. 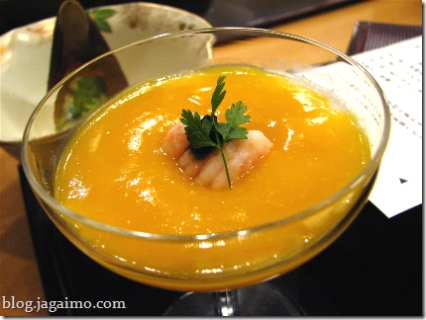 This was Hiromi's, and at first I was a little bit jealous, but eventually my own version served with shibazuke instead of shrimp came. I can't say I've ever seen mango on the menu at a Japanese inn... 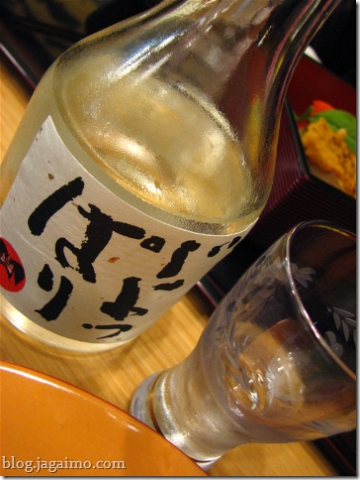 Apparently this sake's name, joppari, means stubborn, which fascinated Hiromi so much that she had to try it. It also happens to have a pleasingly complex flavor, even as it drinks rather smoothly. 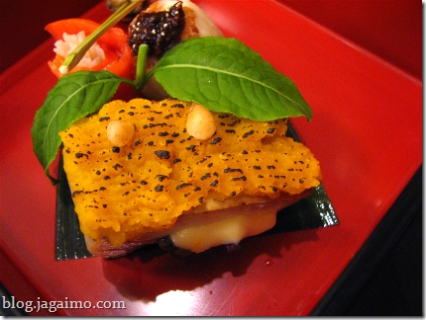 This fish-like fillet for Hiromi is actually kabocha atop ham and cheese, with a few pine nuts. I believe it was served with a grilled scallop and a carved vegetable. 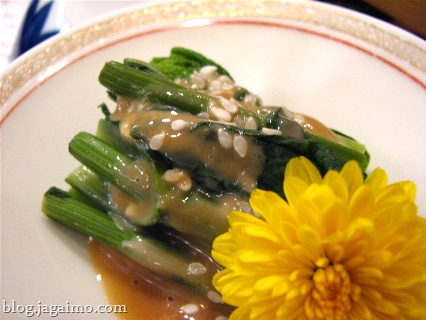 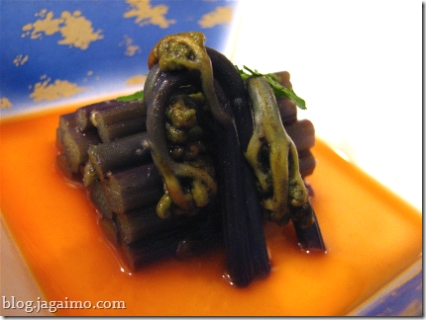 More mountain vegetables, in a simple but pretty ohitashi. 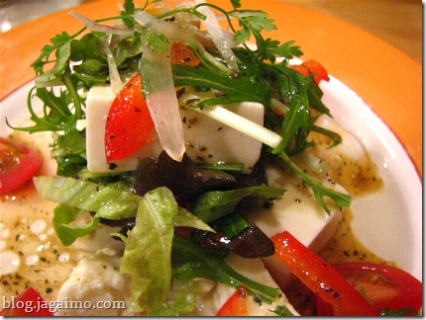 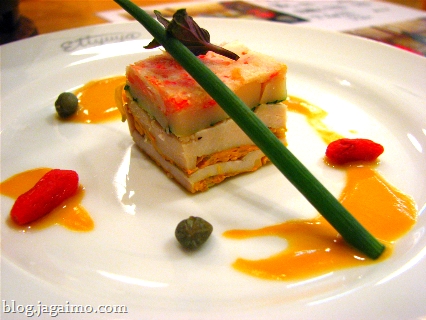 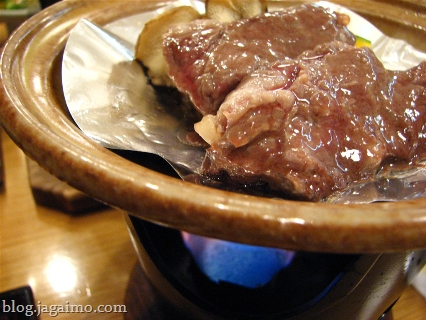 Hiromi also has a grilled wagyuu dish featuring local beef, cooked on a ceramic plate over a small flame. 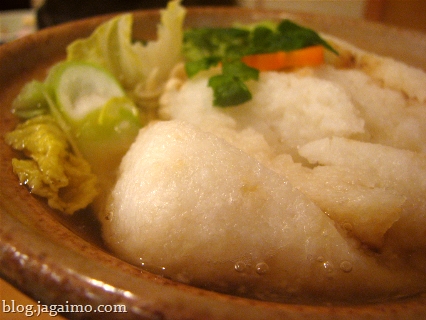 In place of the beef, I have another variation of that northern Japanese specialty, kiri-tampo. This is a simple kiritampo nabe, or hot pot dish. Since I can't have this in the US very easily, I'm pleased to have another chance to taste it.

Oh, and a very nice chawan-mushi, or savory egg custard, arrived at just about the same time as this was ready... Alas, it didn't photograph very nicely, but I'm a sucker for a vegetarian interpretation for chawan-mushi. It seemed to take advantage of some seasonal vegetables as well. 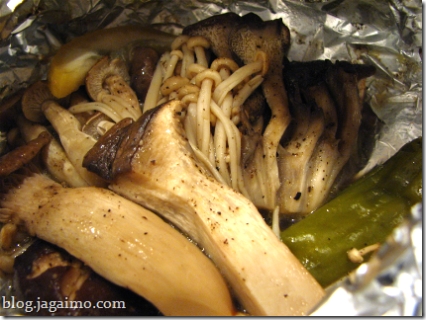 Ringo to sansai to shiitake no tempura 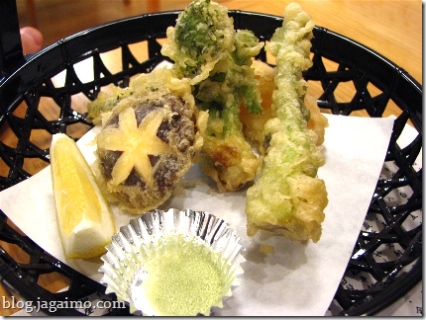 Ryokan tempura is often a little bit dreary, as it tends to be made quite far ahead of service... However, this one was served close to the end of our meal and was still mostly fairly warm. It featured tara no me (one of many Japanese mountain vegetables), fuki (butterbur) sprouts, shiitake, and, most interesting of all, a slice of apple. I've had heavy American fast-food fried apples before, and I have to admit having a soft spot for them, but this was surprising. The fruit was unprocessed, and fried just a short time, so it remained crisp and gently tart, and had the same light crispness that the rest of the tempura featured. 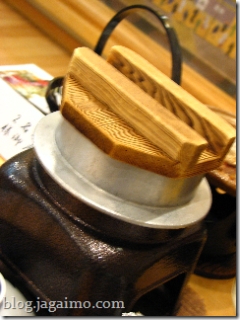 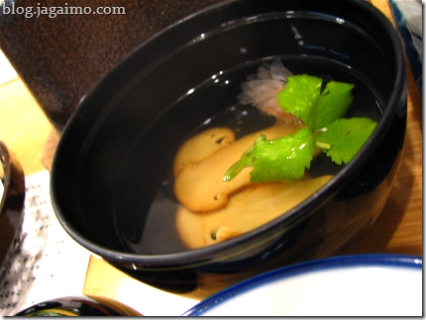 Rice is cooked at our table... Hiromi's is a seasoned kamameshi with bamboo shoots and I think some pork. Mine was plain, but rice cooked in this kind of pot always tastes better. We also receive a simple clear soup with thin slices of mushrooms and salt-cured cherry blossoms. 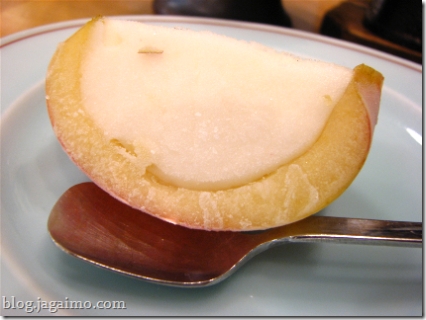 This was a very good apple sorbet inside an apple shell... It's Aomori, after all, and apples are a big deal here.

Before dinner, Hiromi had thought we'd go back to Hirosaki, but I think we fell asleep no later than 9 pm. We somehow woke up again, but it was already approaching midnight... too late to seriously consider the 25 minute trip back to Hirosaki Park, but not too late to head to the outdoor ceramic onsen tub on the same floor as our room.