Rare only for me, of course. As regular readers know, I’m as close to vegetarian as possible for someone who travels to Japan on a regular basis.

Hiromi’s doctor said she’s got somewhat low iron levels. We’ve been mitigating that a bit with supplements and with a heavier use of beans and darker greens, and Hiromi’s been consuming a fair amount of orange or tangerine juice to help absorption. But it’s a lot easier to deal with this kind of challenge by incorporating more red meat and liver in to a diet than to rely on vegetarian sources of iron, and Hiromi only practices vegetarianism when I cook, and I’m far from dogmatic. So we’ve made some little adjustments. 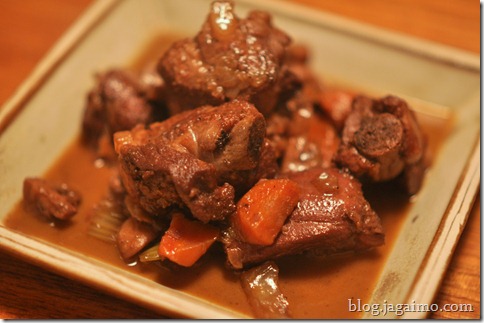 Cooking is usually my job, though, and since Hiromi usually cleans up after the aftermath of my food, I don’t mind making the occasional carnivorous dish for her benefit.

I took some aniseed, coriander seed, allspice, black pepper, some dried smoky chilies, and the seeds from a couple of cardamom pods and ground them in my spice grinder, then mixed this with a bit of salt. I rubbed the pork with this mixture and some olive oil, then I added the seasoned meat to a hot pressure cooker. I let the meat brown a bit, then turned each piece to brown on at least two other sides. I pulled the browned meat out of the pan and let it rest while sauteeing some onions with some young ginger.

I tossed in some quartered mushrooms  with a bit more salt. Finally, I added some rolling-cut carrots and a stick of chopped celery to the mix, completing the mirepoix trinity. Then I added a half cup of read wine and a half cup of water, and restored the meat to the pan. I put the pressure cooker’s lid in place. Once it reached full pressure, I let it cook for 10 minutes.

Hiromi discovered it wasn’t quite perfectly tender when the valve released, so I brought it back to pressure and reduced the temperature to the lowest possible setting that would keep the pressure up. I’m not quite sure how long we let it cook, but it was probably about 25 minutes total.

When the valve released the second time, it seemed ready to serve. When Hiromi tasted it at the table, she reported it was surprisingly tender. We only served about half of it, and it was more than enough with the other dishes we had prepared, so she had a bit leftover for lunch the next day or so.

It was pretty easy to pull off, apparently satisfying enough, and probably no more complicated than anything else we made that night. Braised pork. Pressure cooker. I can work with that.