The first time I knowingly ate anything involving stinging nettles was a jarred salsa sold by a Tibetan immigrant family in Seattle. I haven’t seen their products for years, so I’m not really sure what happened to them, but I guess they haven’t single-handedly pushed the bottled stinging nettle sauce industry past the tipping point. 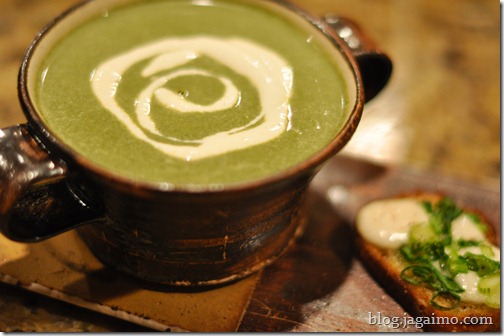 Every spring, I see some forager offering stinging nettles at farmer’s markets, but so far I haven’t been convinced to take any home. Last spring, Hiromi and I had a late night snack at Poppy, where we had an overly salty, innocuously flavored nettle “risotto” which was interesting but seemed not to do much for the nettles or the rice. I was fairly convinced there’s just not much to the nettle but the sting.

But then, a few weeks ago, Hiromi and I decided to have dinner at our neighborhood Basque restaurant, Harvest Vine, which featured a simple sounding nettle soup on the menu. We decided to go for it.

Wow. It was surprisingly deeply flavored. Served chilled, it came with a side of crouton and not much else, but it totally redeemed the nettle for me.

Granted, I suspect that cream and Spanish paprika pulled more weight than the nettles themselves, but we figured that if that’s all it took to make the nettle great, we could pull off something compelling on our own. A few days later, the guys at Sosio’s told me they had a stash of nettles in the back, and I was an easy mark.

I took some of the same basic inspirations as the Harvest Vine version, complete with the smoky paprika, but I wanted to make it my own. When I got home the night we made this, I spent a few minutes stinking up our home grating fresh horseradish root. Hiromi started tearing up the second she got home. I used some of the root for an oil-based vinaigrette that I reserved for other purposes, but I also whipped some of it into some sour cream. 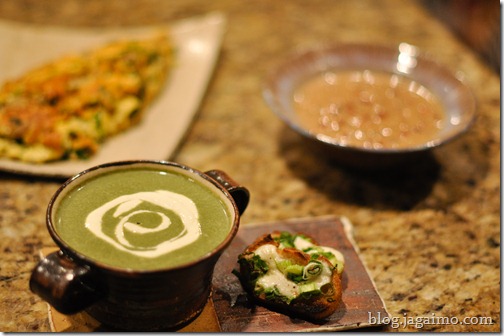 The sour cream topped the nettle soup when the soup was ready to go. It added a great pungency and a refreshing contrast. Apparently, this particular approach is fairly common in Scandinavian and Northern European preparations of the nettle, but I didn’t know any better.

A dirty secret about stinging nettles: they need to be cooked fairly aggressively to remove their, well, sting. They do have a flavor, but it’s not a really intense one; it’s essentially vegetal. More robust than spinach, not as earthy and chewy as lacinato kale, they seem to respond well to being pureed, but they need a little special treatment. I soaked them in warm, but not hot, water for just about 10 minutes. Then I rinsed them, and cooked them down in a pressure cooker for a few minutes. Not only that, but one of the little stems stuck my finger as I was trying to push down the leaves that were in the way of me closing the lid. For the next twenty-four hours, my finger had a strange tingly sensation.

I did ice-water shock them after the pressure cooker to keep them from turning into something unrecognizable, but right after that, they went straight to the blender. Because the puree is a bit rough, I pushed the remaining greens through a sieve to keep the result smooth, and seasoned them with salt and the paprika before adding cream and vegetable stock.

We served the soup with some little crostini brushed with basil olive oil, topped with mozzarella and scallions. 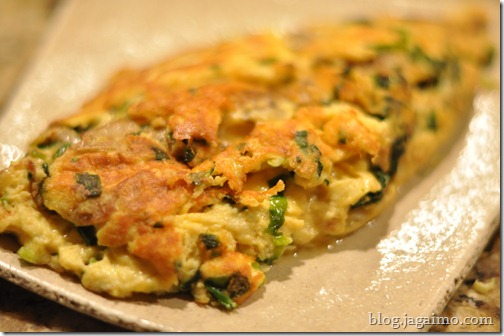 We also had some black beans seasoned with some chilies, lime and coconut milk, and maybe the Indonesian spice blend that we’ve been using from World Spice, if memory serves correctly.

Finally, we had a really nice buttery omelet with wild ramps and morels, similar to this frittata I made a few years ago.

Nettles are probably done for the year in the Seattle area, but you may still have a little luck left. Let me know if you manage to track them down.

It was perhaps overkill for a weeknight dinner, but it worked out really nicely and the only hard work was preparing the nettles for use.