This is why, given a choice, you should either learn to cook or find someone to spend your weekend mornings with who can cook. 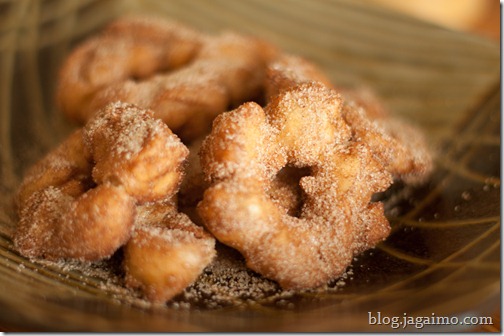 Crullers have nearly disappeared from the shelves of most donut shops, mostly due to the fact that they’re seen as a bit more labor intensive than ordinary donuts. I find it hard to believe that there no machines exist that could reduce the burden, but the fact that they’re now so hard to find presents opportunities for the industrious home cook.

And here’s the thing: They’re not really that much work. Perhaps they pennies don’t work out when you’re making them on the scale that a bakery would need to, but I was able to go from nothing to having them on the table in about 35 minutes. I only made six, but I’m sure I could have scaled up the recipe to about 24 pieces without adding more than a few minutes work.

This is just a classic pâte à choux with a little added vanilla. I added salt and sugar in roughly the same ratio I would use for cream puffs, with perhaps a bit more salt than usual. I pipe the dough out onto waxed paper. There are a few ways you can pipe them, depending on the visual effect you want; I piped small stars in six segments. An alternative would be to use the star tip, twisting gradually, making one continuous round shape.

After piping, I stuck them in the freezer for just about 10 minutes to firm up, which makes them easier to drop into the fryer. They could have easily been kept in the freezer for a week or so. This time, though, I took advantage of the simplicity of the ratio and made just the amount I thought we’d need, which was about 60 ml water, 30 grams. butter, 30 grams flour, and 60 grams eggs (about 2 whole eggs). This makes slightly more than 6 crullers.

Last winter, the first time I made these, I underestimated how much they would expand in the fryer. The steam pressure causes them to blow up into about four times their original size, so make sure you keep that in mind when shaping them. Think small.

I fried them for about 5 minutes total, flipping them about half way through to let them brown evenly. They continue to darken a bit after they’re pulled from the oil.

This time, I dusted them with sugar mixed with cinnamon and a pinch of salt. They could have just as easily been glazed, or chocolate dipped.

What I really like about crullers is how sweet they aren’t, even after they’re dusted with sugar. 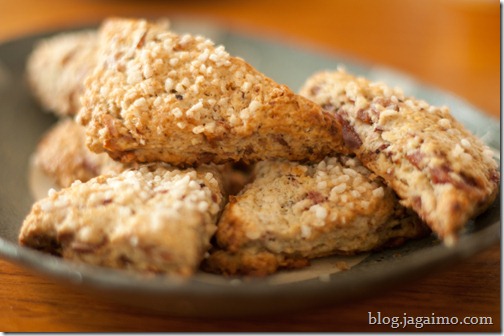 So I thought I might make good use of them by incorporating them into the basic scone pastry. I placed the peels on a cutting board and chopped them a bit more finely than I had them originally, then added them to the dough just before the final splash of milk that holds them together.

The result? Success! The scones needed only the slightest splash of milk since they still had a little residual liquid from the blood oranges. The blood orange added a great aroma and a little bitterness. I was worried that they’d get a little tough since I was adding another step to the process, but they turned out tender yet crisp, just as I wanted.