Hiromi always says that when I’m trying to use up ingredients, the results are often more exciting than when I do something more planned. I think that’s been the case since I was in college, when I would sometimes change course after I started cooking if a particular whim struck me as a good idea.

Usually on weeknights, I’ve got a few ingredients in less than ideal condition that have been sitting around too long. The purple mashed potatoes from my previous entry were in that category, and the ton of bell peppers in that Pope’s bean dish were also completely driven by excess. 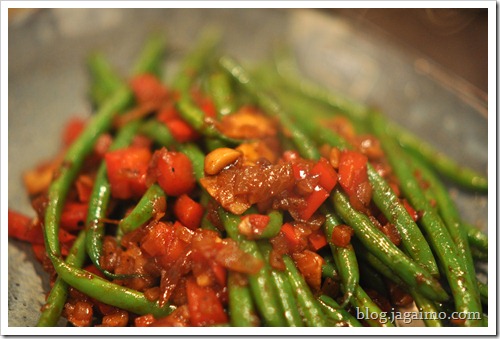 I don’t know how many times I’ve made some variation of this simple side, but we always like sautéed green beans. This one had onions, mushrooms, red bell peppers, garlic, and smoked paprika, and was made with those skinny so-called French style green beans sometimes called haricots vert. “Green beans” apparently sound much more sophisticated when rendered literally in French. 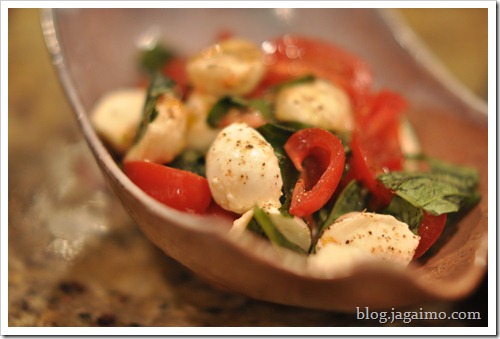 Normally I don’t attempt to make anything remotely like insalata caprese this time of year, but we had some better-than-average-for-this-time-of-year strawberry tomatoes, which are slightly larger than cherry tomatoes and a bit more flavorful. If I were a little more industrious, I might have roasted them a bit first, but this was still pretty good for a completely out-of-season dish. I’d be a little embarrassed to serve this for company, as the tomatoes were a lot more tart than they were sweet, but they beat anything you’d find in a supermarket this time of year.