I recently mentioned my weakness for the seductive smokiness of Spanish paprika. It turns out that, in my kitchen, precious little of my supply ever makes it into anything remotely resembling proper Spanish cuisine. But there are occasional exceptions. 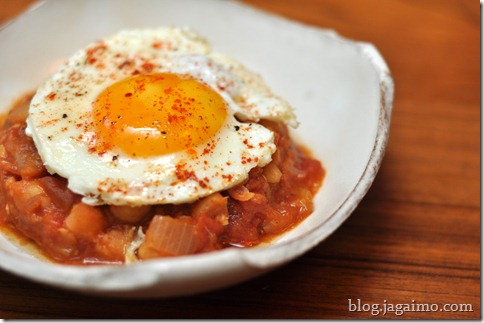 While seasoned chickpea and tomato dishes are rather common in pretty much every country that’s ever seen both ingredients, one of my favorite preparations is a Moorish-style preparation full of Spanish paprika.

Even within that realm, I’m sure there are a ton of variants. Some are garlicky, some are mostly seasoned with onions, and a few of them incorporate additional greens like spinach. I like them all. If it’s on a tapas menu, I’m a guaranteed sucker for it… We’ve ordered versions at Txori in Seattle, at Jaleo on a recent trip to DC, and probably anywhere else we’ve seen it.

Granted, it’s a humble dish, and maybe a bit homely, but it’s a fantastic way of adding a bit of protein to a cuisine which isn’t heavy on purely vegetarian protein options, aside from Spanish tortillas and various cheeses.

I did this version sans garlic and perhaps overemphasized the tomatoes. Thanks to Jaleo’s menu I stumbled on to the brilliant suggestion of topping it with a sunny-side-up egg. I cleverly forgot to butter the egg ring, so it’s not quite as pretty as it might be.

Thanks to the pressure cooker we picked up this winter, the dish comes together rather quickly. Precook the chickpeas to the point that they are soft, but not mushy. If you want garlic, toast a clove or two in olive oil gently until the garlic is just slightly browned. I then add plenty of chopped onions to the pan and cook them until transparent. Once the onions are nice and soft, I throw in a little splash of wine and add chopped or pureed tomatoes, a serious pinch of Spanish paprika (don’t waste your money on the not-at-all-similar Hungarian style paprika for this dish), salt and pepper, and the mostly-cooked chickpeas. Simmer until you’re ready to eat them, but not less than 15 minutes.

For something more verde, add blanched spinach just a minute or two before serving.