These Peruvian beans, called fagioli del papa in Italian, have a robust flavor and a dramatic color. This was just a quick-and-dirty weeknight preparation, so I don’t even remember exactly how I seasoned it, but I know I used za’atar, onions, garlic, and a mix of bell peppers, along with a touch of tomato. I boiled the beans themselves with a few allspice berries and bay leaves, just enough to make the beans a bit more mysterious but not so much as to compete with the final seasoning. 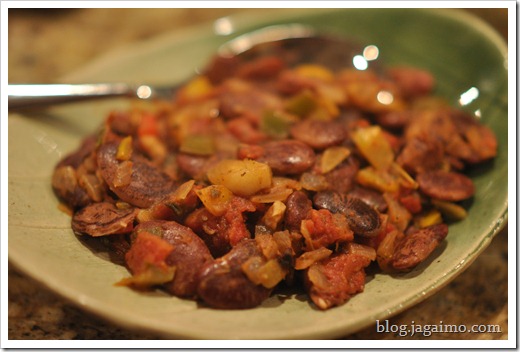 Anyway, we liked the results, even with fairly odd combination of ingredients.

I rescued a few lonely purple potatoes that had been sitting neglected, almost forgotten, in a brown paper bag. After boiling them, I pressed them through a potato ricer, and brought them back to my smallest sauce pan to cook them with a little butter and salt. I stirred in milk gradually, then I finished them off with an unhealthy dose of medium-aged gouda. 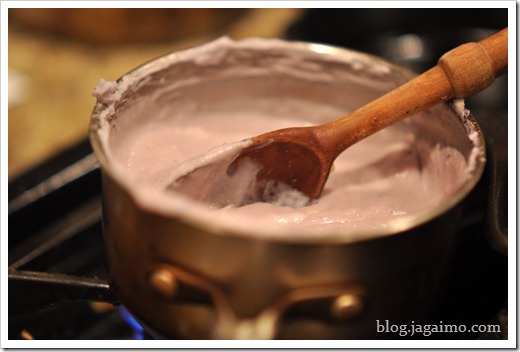 I don’t know how to make mashed potatoes look interesting, but this version was fun, and like with any other version, butter does most of the work. Milk softens the color quite a bit, so the result leaned a bit lavender. 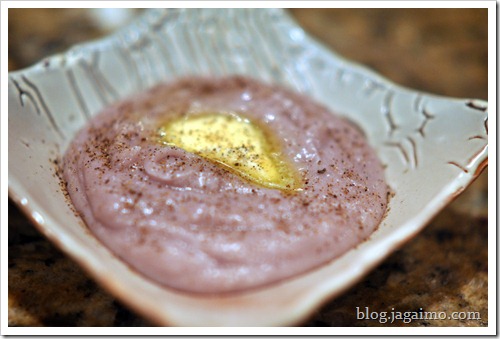 The puree, while not especially pretty, was surprisingly smooth. I usually don’t stir mashed potatoes much after ricing them, for fear of turning them into glue, but I must have gotten the temperature just right, because they were almost impossibly creamy. Despite the suggestion of the little pat of butter on top used to finish them, I used only a couple of tablespoons of butter in the puree itself, for about a half pound of potatoes. Good and simple.