For years, I was impressed more by the idea of scones than the reality of scones. It’s mostly because I made the mistake of buying them at coffee shops, where they cost about $3 and generally taste stale and tough and excessively sweet. They typically rather unimpressively attempt to make up for their inadequacies,  especially the fact that they aren’t served with good butter and jam, by replacing all of the textural greatness of a fresh scone with sugar. 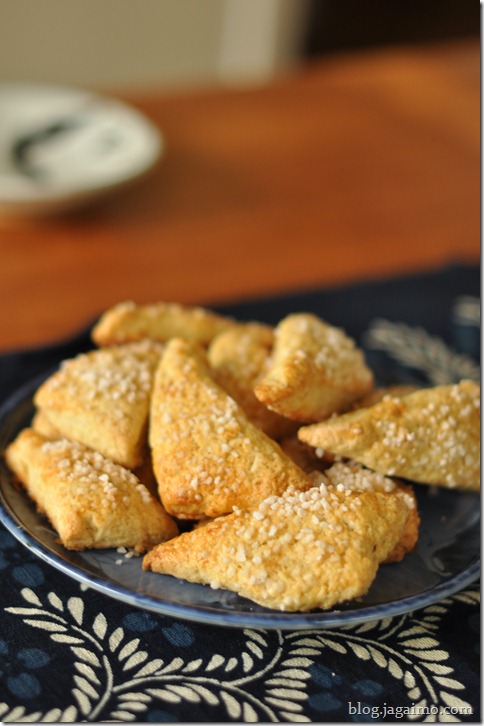 Freshly-baked scones are an entirely different animal. They’re aromatic, crisp yet tender, and need very little sugar of their own if served with a little butter and jam. The best thing is that they need so little effort to prepare. The dough comes together in two or three minutes, and they take just 20-25 minutes to bake. It’s easier than pie. 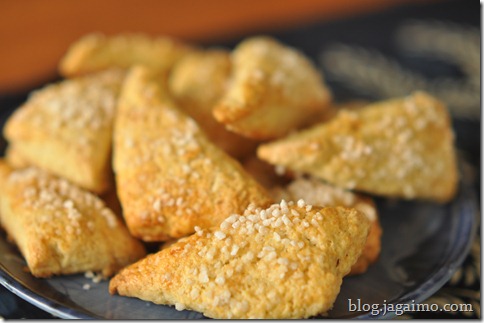 This morning, we woke up late and hungry. I was almost tempted to make a trip to a bakery, but then I realized I would have to shower and shave before I was fully awake, and that would make Sunday morning seem far too much like a normal workday for anyone’s good. To arrange for fresh scones, I just needed to stumble into the kitchen, preheat the oven, and pull together a few simple ingredients. 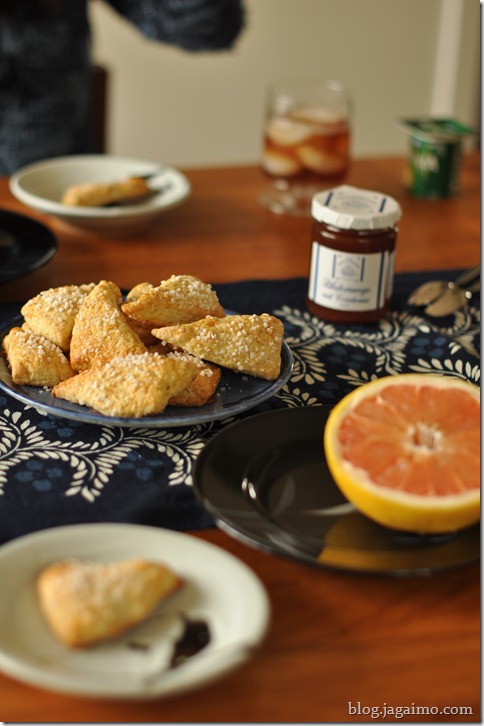 I follow a simple ratio to get decent scones no matter what I put into them: 1 stick of butter, 1.5 cups of flour, about a teaspoon of baking powder, 1 egg, and a little bit of milk, yogurt, cream, or sometimes sour cream. I almost always add a bit of salt, and for sweet scones, I add probably no more than 3 tablespoons sugar. Today, I had a nice orange in the refrigerator, so I grated about a teaspoon’s worth of zest to flavor the scones. A little vanilla would be nice, too.

The dry ingredients just need to be sifted together and the butter cut in gently. When I get this far, I make a well in the middle, and I add the egg and a splash of milk. I stir the liquid in the well and gently fold the ingredients until the mass comes together. 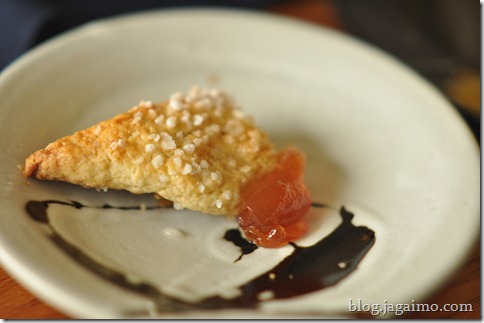 Then I just roll out the scones to an even thickness, cut them into small triangles, and bake them. To make them a little prettier, I brush them with a little egg wash and sprinkle on pearled sugar, but that’s totally optional.

The scones just need to be baked at around 375F until they look nice and gently browned, usually about 20-25 minutes.

They’re buttery enough when fresh out of the oven that we usually don’t do more than eat them with some nice jam unless we’ve got some truly spectacular butter or some Devon cream around. Today, we cracked open a blood orange gelée-style jam that we found in a little tea shop in Hannover, Germany over the New Year holiday. This jam, which is flavored with a little Cointreau, had a nice complexity and I may steal the idea if I ever take up canning.

The moral of the story: Don’t settle for bad scones. Just make them yourself, and they’ll be miles above the quality of nearly anything you can buy.