So I’ve had this dangerous affinity for meringues in the last year or so. I like them on cakes and pies, I like them on savory dishes, and I sometimes like them all by themselves.

This occasionally results in something approaching culinary genius, but more often than not, something goes slightly wrong. The most common problem is usually my piping effort. My technical mastery of piping can, more often than not, be fairly compared to the artistry of a six year old. Occasionally I just over-bake them by a few minutes and they come out far too dark. 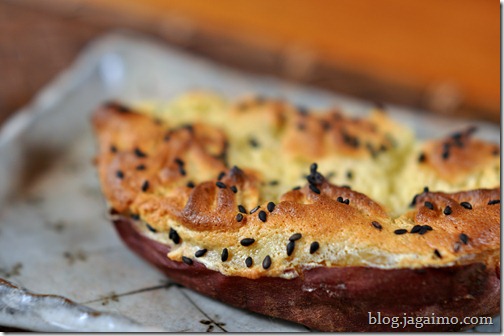 This one decided to explode.

You may not see it here, because I tried to find the best possible angle, but my meringue mostly deflated before it ever finished baking. It spread out more than it puffed up.

In fact, it’s technically more of a soufflé than a meringue. What I did was roast a Japanese sweet potato, slice it in half lengthwise, and scoop out a good amount of flesh, which I mashed. Then I mixed the mashed flesh with egg yolk while the flesh was still warm. Separately, I beat egg whites into a meringue, adding a small amount of sugar and a heavy pinch of salt. Then I gently folded the sweet potatoes back into the meringue, and filled the scooped out part of the potato with the mixture. To finish it off, I piped a bit more of the mixture on top with a star tip, and sprinkled black sesame seeds on top. I then baked the dish at about 375F until it was nicely browned.

I think I used a bit too much egg white. But the result, even if a bit ugly and quite technically flawed, tasted pretty nice. I added enough salt to the mixture to make this a savory side dish rather than a dessert, but you could certainly adjust the preparation to make it work either way.

Done right, it could look quite elegant, but I’m almost happy with my admittedly rustic results. It’s a little wafuu without being something you’d typically find in most Japanese mothers’ repertoires, and compatible with both Japanese and American taste sensibilities.

Next time, I want to make some adjustments to improve the stability of the foam. But it’ll go on one of my menus again.