No matter how hard we try, the two of us cannot eat a large pot of what amounts to be little more than mashed potatoes, regardless how many greens are involved.

So I decided to repurpose the leftovers a little bit. I melted some butter in a 6” skillet and added a spice blend (Kashmiri garam masala, I think) and turmeric, then poured it over the remaining colcannon in the refrigerator. I also added some frozen peas. 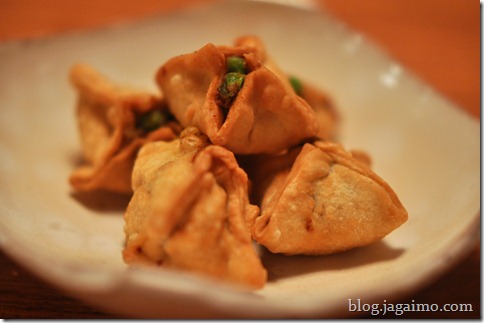 I improvised a dough by rubbing some of flour and salt with a bit of butter, then added just enough water to combine. I worked the dough together and let it rest for a while in the refrigerator. 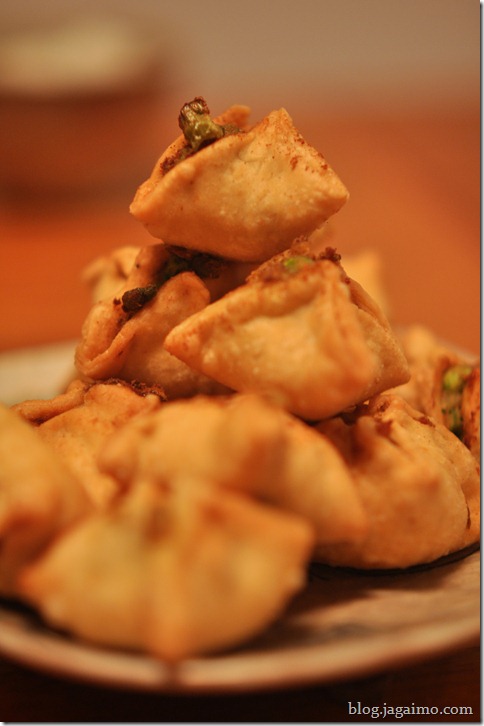 I then rolled out the dough and cut it into small pieces, and Hiromi and I got to work stuffing them.

The first night I prepared them as just a little snack to go along with a couple of other dishes, but tonight I noticed I had some ungracefully aging pears in the refrigerator, and thought I should make quick use of them before something nefarious happened. I put together a simple chutney built on fenugreek, allspice, a little black pepper, and coriander, along with some fresh young ginger, onions, and a couple of fresh chilies, along with a bit of salt and unrefined sugar.

A couple of nights ago, I prepared some cranberry beans with some Chinese spices like star anise and some large white seed I’ve never learned the name of, and some fennel seed. I thought I was going to use these as a little bean side dish that never quite happened. By the time I needed them again, I had a far different craving, so I mashed the beans with some egg, flour and breadcrumbs, and pan-browned them in a nonstick omelet pan with a little oil. (They could just as easily be deep fried).

I was ever-so-slightly worried that the vaguely Chinese seasoning of the beans would fight with the vaguely Indian seasoning of the chutney, but actually they worked quite nicely together. The star anise and fennel added a nice depth to the bites of the cranberry bean cakes, and the chutney added a nice gently-fiery sweetness. We also found that the baby spinach underneath, motivated mostly by color, proved to be an useful utensil for carrying the bean cakes to our mouths, and added a little textural contrast.