We self-indulgently bought a pasta roller last summer. It’s a single-purpose device, and I don’t have many items like that, at least not when they take up as much room as that, but pasta is a staple food for us and I wanted to have a tool that made it easier to produce pasta of a consistent thickness and texture.

I’m still not quite at the level where I’m going to beat anyone’s Italian nonna if we undertook some sort of pasta death match, but it’s surprising how little practice is required to develop perfectly respectable results. 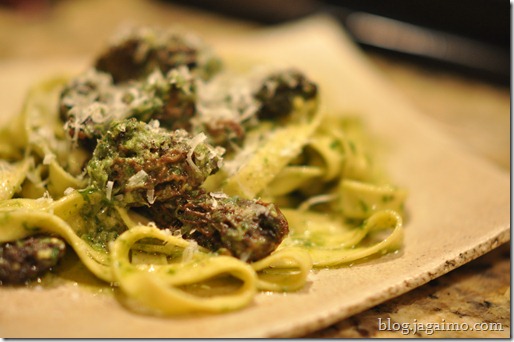 One of the guys at Sosio’s happens to go to the same gym I do, and he’s there nearly every day. He noticed me fighting the dumbbells little over a week ago and told me I needed to come in and get some morels, which seem to have come in a bit early this year. So I went in on the weekend and grabbed some.

I thought it was a good excuse to break out the pasta maker. It’s really not too time-consuming to make a small amount of pasta, at least in the amount required to serve 2-4 people, so it’s even manageable on a weeknight. The only difficult thing is allowing the prepared dough to rest 30-60 minutes before attempting to roll it out. If you don’t do that, it fights with you, and you get these crazy holes inexplicable places. But once it’s reasonably well rested, the gluten in the semolina relaxes and the dough cooperates nicely. It just requires a little patience, and, when possible, another pair of helpful hands.

We had plenty of pesto I prepared for a lunch meeting on Sunday afternoon. The particular pesto I made was not prepared from the usual Genovese ingredient of basil, however. I turned to mizuna, a Japanese green with a flavor similar to, but slightly brighter than arugula. This is one of my favorite versions of pesto, and turns out to be ever so slightly cheaper than the basil version, since it comes in roughly one-pound bundles for $2.80 at Uwajimaya; I usually have to pay at least $4/pound for basil when I buy it in bulk, if not more, and it’s crazy expensive when purchased on those obnoxious $3 one-ounce plastic containers at the supermarket. So it not only makes a refreshing change of pace; it’s also surprisingly frugal.

I suppose that’s kind of moot after paying for morels, but they were surprisingly inexpensive for ones sold so early in the season. I’ve paid more in the peak of the harvest in past years, so we must have a particularly prolific crop in store.

Under the more relaxed conditions of weekend pasta-making, I like to let the rolled and cut pasta dry out a touch, maybe an hour or so, before I try to boil it, but for fettucini, it’s not really necessary. We once tried the spaghetti cutter on a weeknight and tried to serve that with a tomato sauce before letting it dry at all after cutting, and we produced something very similar to ramen-shop ramen instead of spaghetti. I might be wrong, but my limited experience seems to tell me that, when under time constraints, wider noodles like fettuccini or tagliatelle work better.

The morels were just cooked with a generous knob of butter and salt as the pasta cooked. I drained the pasta after cooking it for 2-3 minutes in salted water, leaving just a touch of water in the pan, and tossed the pasta, morels and mizuna pesto together until combined.

It’s best served hot, and pesto cools quickly, so get it right out there on the table and eat!

We had it with a nice serving of lentil soup, which was part of dinner a couple of times last week, and maybe a little salad.

There’s not much of a recipe, as it was really about having everything around when I needed it and adjusting seasoning as required, but the mizuna pesto goes a little something like this: