We have a somewhat implicit bias favoring simple, seasonal food that requires minimal forethought, but generally I’m willing to do a bit more work to step up the drama. 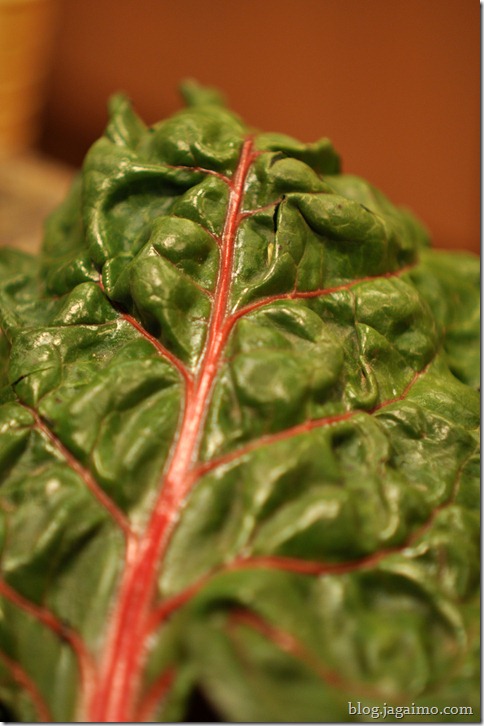 Gefüllte Mangoldblätter, or stuffed Swiss chard, appearing in many German cookbooks when I lived there, but I’m pretty sure I never once made it myself in the entire time that I was in the country. It’s not so much that I was intimidated; I suppose i just didn’t see the point. Or maybe I just didn’t know what to do with the vegetable when I saw it. 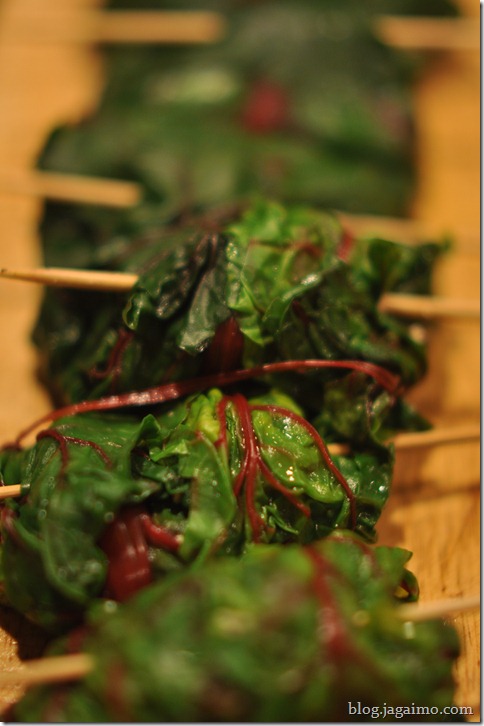 Hiromi has a strong affection for rolled cabbage, though, so it was inevitable that I’d eventually apply the same treatment to Swiss chard. Actually, we’ve probably done it before, but I can’t quite remember when, so I’m going to say it’s still new to us.

Hiromi trimmed the leaves and we blanched the chard briefly, giving it just about one minute in the boiling water before draining and transferring to a big bowl of ice water to stop the color change. 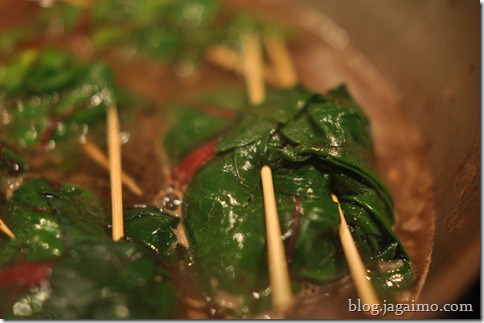 I prepared a filling inspired loosely by Hiromi’s preferred style of ganmodoki, which has some black and white toasted sesame in it. I basically sauteed some nira (a sort of Asian chive commonly used in Japanese-style gyoza) and diced shiitake with a couple of serious spoons full of black and white sesame seeds, and. Once the mushrooms were suitably browned, I added this mixture to some crumbled medium-firm momen tofu and stirred everything together. Hiromi stuffed the leaves, and skewered them with short kushi, or kebab sticks, to hold them together.

I made a simple vegetable stock just before we had gotten started on this, using a mirepoix as a foundation, so the last bit came together quickly. In a saucepan I lightly browned shallots and added stock, a little splash of wine, and salt and pepper and maybe a few other herbs. 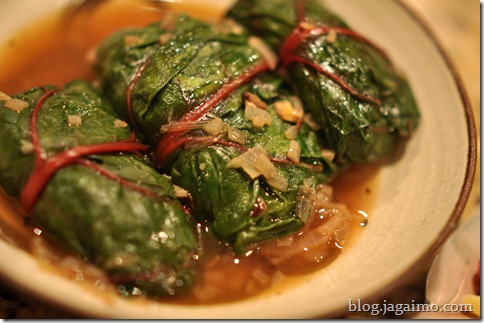 We then put the stuffed chard rolls into the saucepan just for a couple of minutes to let everything mingle together, and we served them.

The robustness of the chard turns out to help the rolls stay together; they were far less fragile than the cabbage variants we’ve made before. The sesame, shiitake, nira and fresh tofu in the filling removed most of the commonality with all but the most contemporary of German versions, but provided a great source of flavor, and was comforting for the Japanese half of the family. And the shallot-enhanced broth married the earthy chard together with the savory filling.

I’d say I prefer this version over the vegetarian cabbage rolls I’ve previously made, since the wrapping itself is a star player; cabbage tends to be much less assertively flavored, and probably wants even more powerfully seasoned fillings. I felt like I could have gotten away with a slightly milder filling compared to what we ended up with, but it turned out just about right.