As a vegetarian, I don’t eat the most common variations of okonomiyaki, which involve pork or other animal bits.

I’m quite fine with the “modern yaki”, as one Tokyo restaurant called their wackier, contemporary spins on the dish; okonomiyaki is really a modern dish itself, and crazy variations are totally in keeping with the convention. One of the first two versions I ever tasted involved chunks of cheese mixed in the batter, and that suits me just fine. But one aspect I haven’t given serious thought to is a suitable replacement, either visually or in terms of flavor, for the katsuo-bushi, shaved dried skipjack tuna that is nearly always sprinkled on top. 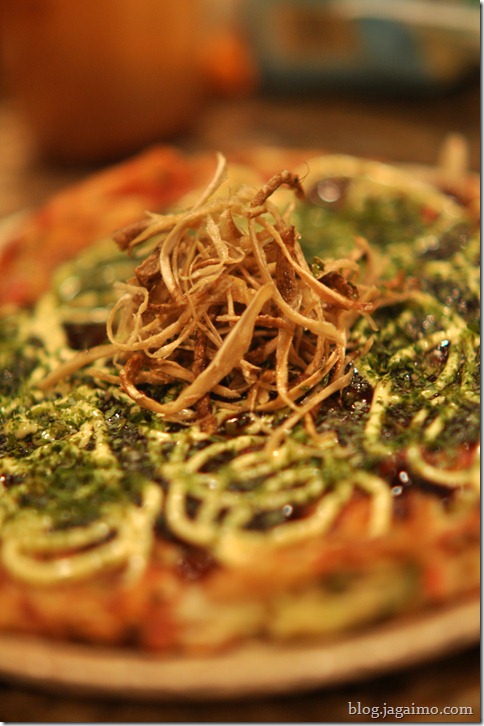 Until now. I made fried shaved burdock root (gobo chips) for an unrelated purpose earlier in the day, and had some left over. Since we had a really heavy lunch at Lunchbox Laboratory earlier in the day, and some snacks for a photography gathering on Sunday, we decided to go with ostensibly lighter fare for dinner. Or rather, as light as a savory pancake covered with mayonnaise can be. Mine had an overdose of kizami-shouga (pickled matchstick cut ginger), because I can, and pieces of aged cheddar and gruyere inside.

I’ve certainly done other versions of this, but the gobo worked very well. Obviously the burdock is a lot earthier than katsuo and doesn’t have the same kind of aroma as the katsuo, but it’s sliced thin and adds a nice crisp texture that works really well. It’s also at least as visually interesting as the katsuobushi. 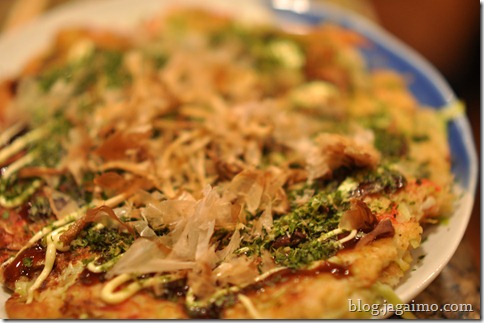 Hiromi had a pork craving, so we made a more conventional version for her. This one was basically chopped pieces of pork loin cooked with salt and pepper in the frying pan briefly before the cabbage mixture is added. It’s also made with the usual pickled ginger, but more importantly, this version has the standard katsuo-bushi topping (but Hiromi wanted some of the burdock too, because there’s nothing quite as dangerous as fried gobo).

Katsuobushi placed on top of hot okonomiyaki has one visual advantage, only recognizable with full-motion video or by sitting right there at the table when it’s served. The extreme thinness and large surface area plays with the heat from the pancake, and the dried fish writhes and dances around as the okonomiyaki cools.