Someone may eventually convince me otherwise, but I’m pretty sure that most wild Northwest mushrooms benefit the most from a minimalist treatment.

I’ve found no better confirmation of this than the chanterelle, and the similar, but slightly homelier hedgehog mushroom. 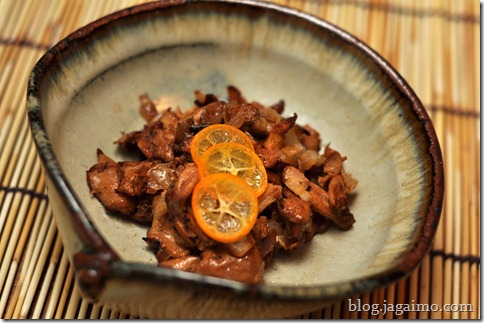 The most reliably pleasing treatment of these mushrooms, for me, requires only four ingredients and a little attention to detail. I mince a shallot, coarsely chop the hedgehog (or chanterelle) mushrooms, and stick these straight into a small, hot cast-iron skillet. In just seconds, you see an unlikely amount of water emerge from nowhere.

After the water cooks off, add life-endangering quantities of good butter, and some nice salt. I love to use alderwood smoked salt that I pick up at World Spice Merchants below the market in Seattle, but this time I used a fennel salt that I prepared myself. Fennel salt is exactly what it sounds like: equal portions fennel seeds and coarse salt, ground in a spice grinder until the fennel turns into little specks. If you want something fancier, give this one from Ritrovo a try; it’s got fennel pollen, whatever that is, and a few other herbs and spices, and it’s very good, but it’s also $15 or so a jar. Fennel and most of the herbs in that mix are not usually more than $3 an ounce.

You may want to add a little pepper, and maybe a touch of freshly ground nutmeg. If you don’t have fennel around, it can’t hurt to use a bit of fresh thyme.

Cook the mushrooms until they’re slightly caramelized, and serve.

Hedgehog mushrooms and chanterelles are picky about how they are cooked. If you make the mistake of adding the butter to the pan before adding the mushrooms, you’ll find that the moisture never quite disappears and you waste crazy amounts of money buying wild mushrooms only to end up with a rubbery mess. If you wait to add the fat until they’re slightly dry, you get magic. Personally, I prefer magic.