I love rapini, the bitter Italian turnip green sometimes called broccoli rabe. Hiromi compares it to nanohana, a similarly bitter green of the rapeseed plant that’s easier to find in Japan. Both are members of the big brassica family, and, as the “rap” in each word suggests, they’re closely enough related that one could easily be confused for the other.

But in spite of my affection for this vegetable, I’m the first to admit that, thanks to its bitterness, rapini is a tricky vegetable to work with. A few months ago, I made the mistake of trying to put together a stew-like preparation with lentils and briefly blanched rapini. The combination was so overwhelmingly astringent that nothing could save it, including some biscuits that I thought would provide enough contrast to balance out the greens. I made it for a party, in prodigious quantity, so it was kind of embarrassing. Even though many people did their best to eat a few bites, I knew it took more than a little effort to tolerate. 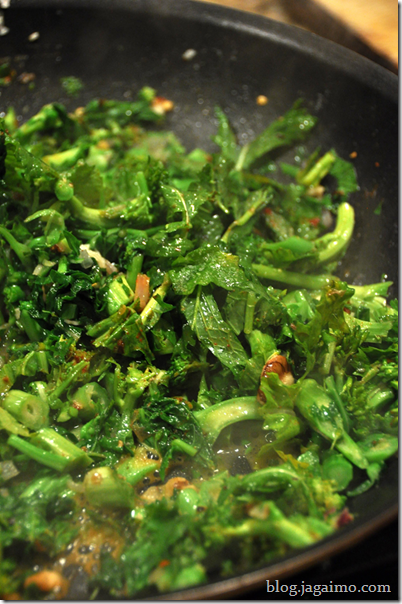 I know Italians often soften the bitterness by cooking this vegetable with some fatty sausage, but as a vegetarian, I needed to find some other option. I thought some soft cheese might do the trick.

First I cooked some shallots in a serious dose of good Vermont butter. 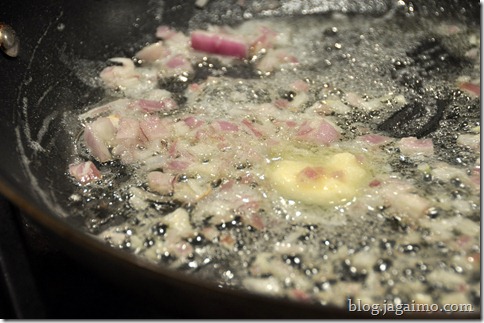 I chopped the rapini and, near the end of the pasta’s cooking time, tossed it into the pan. Like most mustard relatives, the longer you cook this green, the more pungent it becomes, so it’s important to avoid cooking it too long. 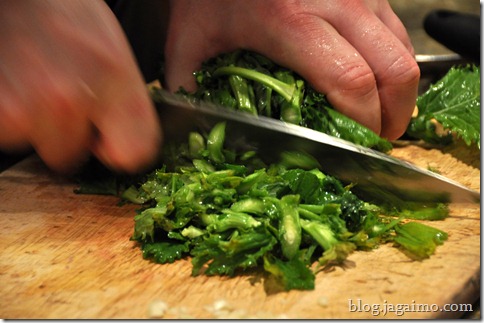 I added the greens to the pan and tossed them around a bit with some Spanish paprika. Over the last year or so, I’ve developed an incredible weakness for Spanish paprika, thanks to its smoky aroma and deep flavor. It adds just the right kind of complexity to stand up to the assertive greens. No salsiccia required. 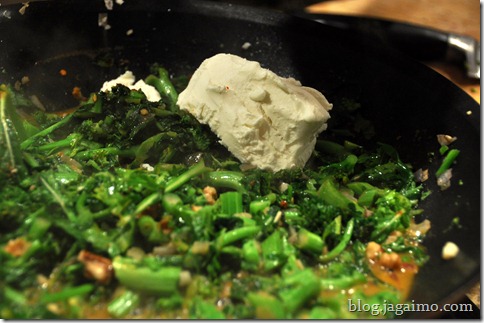 I worked in a healthy quantity of soft chèvre after the rabe was nicely coated with the butter and slightly wilted. 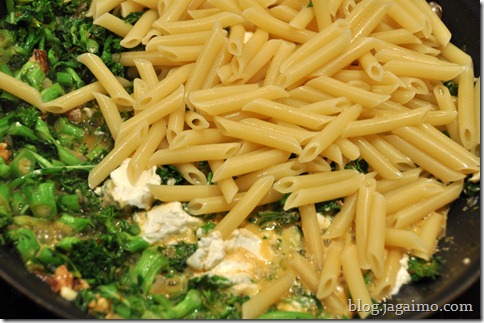 I didn’t bother to wait until the chèvre melted before tossing the ingredients with the pasta. While I stirred everything together, the cheese and everything else developed into a much more uniform sauce. With just a few seconds to go, I threw in a few halved tomatoes. After a few shakes in the pan and some seasoning adjustments, I called it done. 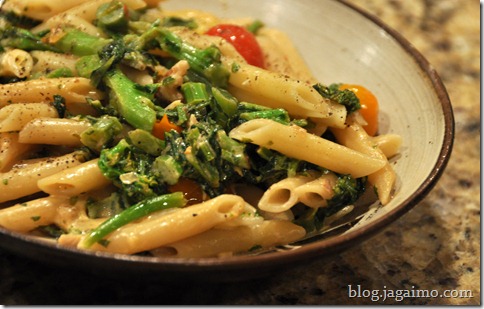 The result? Just what we were after. The bitter greens still held their own, but the chèvre and the pasta provided enough contrast that it was no struggle to enjoy the dish. The smoked paprika brought everything together, and contributed a really irresistable aroma. The penne itself I could take or leave; I would probably have been happier with a ridged version (penne rigate), but I used what I had in the larder. Some fresh fettuccini might be even better.

I’m convinced that rapini and chèvre belong together. I’m tempted to do a sort of white pizza with a chèvre and garlic base and a scattering of blanched rapini, served with some crushed dried chilies. Maybe a sort of chawanmushi-style savory custard would work. I’m pretty sure a simple omelet or frittata would turn out nicely, too.