As a child I was under the unfortunate impression that rice pilaf was something that came from a box. The first “real” pilafs I tried were usually bland affairs mostly involving overcooked frozen vegetables.

I never developed a great affinity for the pilaf, so I’m not predisposed to the same kind of nostalgia I might have for, say, mac & cheese or lasagna. In fact, I’d almost go so far as to say it usually sounds too boring for me to even think of cooking.

But it doesn’t have to be this way. A heavy hand with fresh herbs and a good mix of can work wonders for the humble pilaf.

One recent evening, Hiromi was feeling a bit of bread overload, so she asked for something built on rice. Most of what we had on hand was more suitable for Western rather than Japanese treatment, and I didn’t want to let any ingredients go to waste, so I reached deep into my arsenal of improvisations and decided to break out our casserole dish.

After washing the rice, I sort of toast it in the pan with a little butter before adding liquid. This does wonders to keep the dish reasonably moist, and it certainly adds a nice flavor, too. 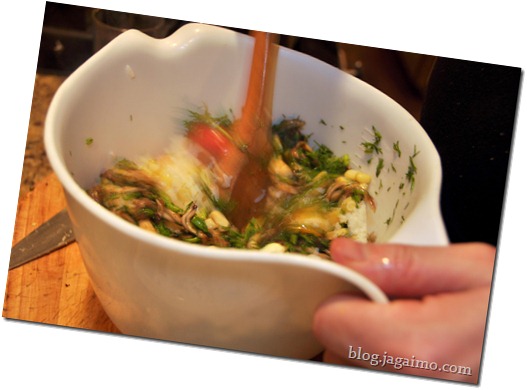 I like to parboil the rice in seasoned vegetable stock in my pressure cooker before combining it with the main ingredients. Then I finish the pilaf off by allowing it to “rest” in relatively gently heated oven, usually 350-375F, for about 10-15 minutes. This allows the rice to develop a reasonably fluffy texture without overcooking all the vegetable ingredients.

I precooked the shimeji a bit so that they wouldn’t dry out while in the oven. I just gave them a quick sauté with butter and shallots, letting them brown a tiny bit. 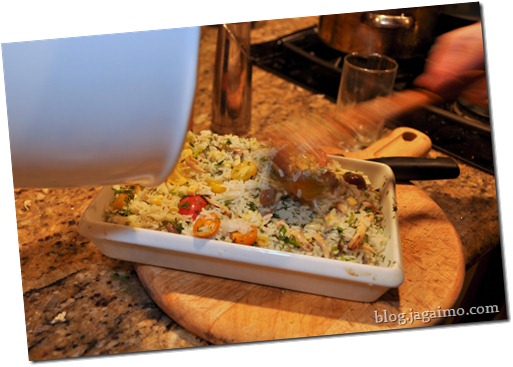 I mixed the partially cooked rice with the cooked mushrooms, plenty of raw dill, raw tomatoes, and a handful of frozen corn. I did zero planning on this dish, so it was all about what we had in the kitchen, so it’s a rather eclectic combination. 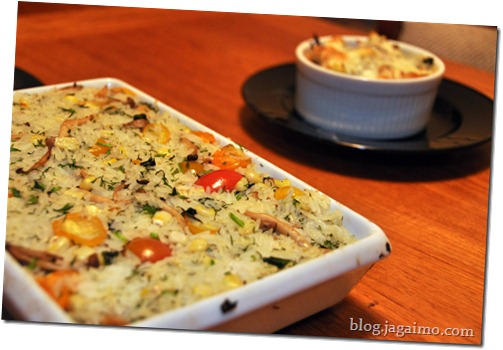 The dill made the dish. I don’t think I would have bothered without a generous helping of fresh herbs… thyme, dill, rosemary, or oregano would have done the trick. Basil or mint could have worked in some circumstances, but mushrooms like earthier herbs. 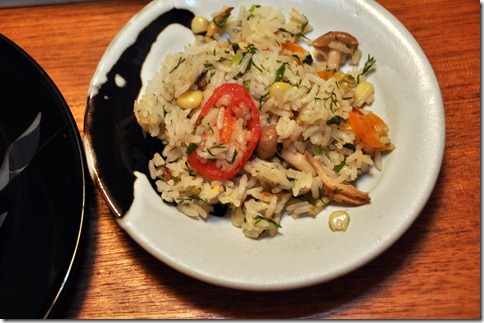 It’s probably best to serve this with something high in protein, like a lentil soup, but we had overdosed on beans that day thanks to a spicy soup at lunch, so I served the pilaf with a slightly more complicated than necessary vegetable gratin for a late evening dinner.

To prepare the gratin, I took some more shallots, rehydrated sundried tomatoes, basil and pine nuts, and sauteed them together with a little salt. I then mixed this together with romanesco broccoli. 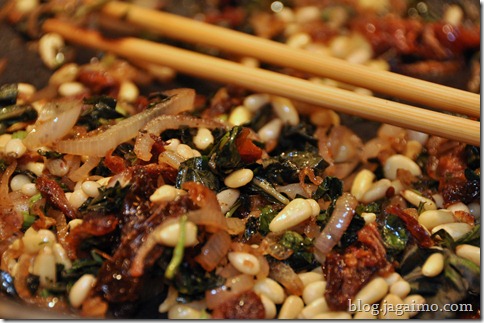 I can’t quite remember if I blanched or roasted the romanesco before finishing it off in the oven. But either way would work, with the caveat that over-roasting would produce an unpleasantly dry result, and blanching would really only need about a minute of boiling before refreshing in ice-cold water, since the dish gets additional cooking when the cheese is melted. 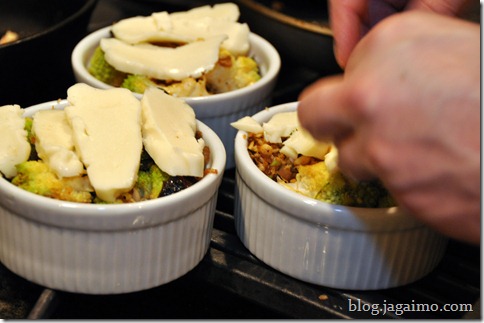 I was getting a little impatient that night, and most of the ingredients were already hot and cooked, so when the cheese didn’t have quite the right golden-brown texture I flipped the oven into broiler mode and slighly charred the vegetable. 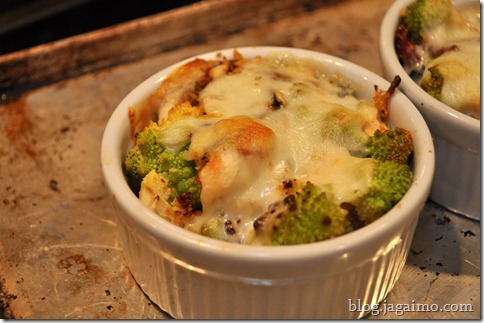 Cheap mozzarella works well for this, so I just broke out a big log of mozz we often have on hand from Trader Joe’s. If I repeated this dish, I would rather have used some oil-marinated sundried tomatoes rather than simply rehydrated ones, since they did get a bit dry, but overall, the dish was comforting and rounded out a simple weeknight dinner nicely.