Rogue River Blue only makes the briefest of appearances whenever Beecher’s gets hold of it. Last weekend I was lucky enough to snag some, and the only hurdle to obtaining my treasure was a misbehaving point-of-sale system that was backing up the cashiers as they hand-entered every transaction into a paper ledger.

The cheese is wrapped in grape leaves and washed with a pear brandy. Production is very limited, and it seems to get a bit more expensive every time I find it, but as an occasional splurge it’s completely worth it.

Like most great cheeses, it likes to be served at close to room temperature. Leave the leaves on the cheese when serving, because they contribute a lot to the flavor. 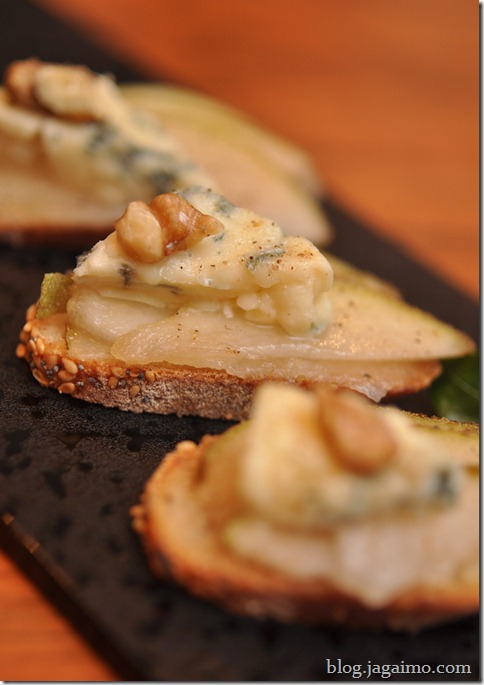 You don’t need to do much to enjoy Rogue River Blue. I usually just dig in, or serve it with some crackers, though I’ve occasionally melted it over some vegetables when the mood struck.

This time, I thought I’d do a more classic combination, and break out some pears I picked up at the Pike Place Market.

US production of the pear variety, called Taylor’s Gold, is mostly concentrated in Washington and Oregon, and right now they’re absolutely fantastic… The aroma is really intense and they’re almost shockingly sweet.

I sliced them thin and fanned them out on slices of seeded baguette, and put little triangles of the cheese on top, finished with some freshly toasted walnut. I finished everything with a little drizzle of chestnut honey over the pear and a bit of freshly ground black pepper.

The Rogue River Blue is magical. It’s powerful but the brandy makes it almost fruity, and the rind has has none of the ammonia you might expect. The pear and honey nicely balance the slight saltiness of the cheese. You could have this as a little pre-dinner snack, or even as a stand-in for dessert.