Umezu, or Japanese apricot vinegar, is a byproduct of umeboshi production. It’s salty and sour, with emphasis on salty. It really doesn’t get a whole lot of play in ordinary Japanese cooking, and most likely owes its relatively wide availability in the US to its popularity among macrobiotic freaks practitioners. Thanks to that, it’s almost easier to find at natural foods stores than it was to track down my local Japanese supermarket.

But even if the word macrobiotic gives you frightening flashbacks to the 1970s, I can assure you that umezu (sometimes romanized as umesu) does have its charms. 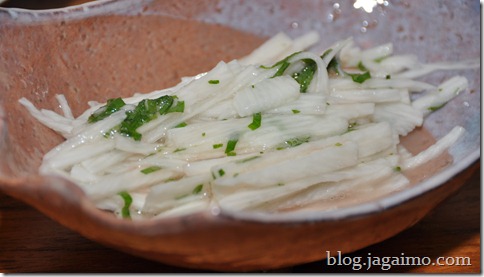 Hiromi and I visited one of the Vancouver fireworks shows last year and discovered a simple but clever use for the ingredient at Zakkushi on Denman, where we had a trio of little vegetable dishes including this nagaimo preparation.

It’s really nothing to make… You take the nagaimo, a starchy tuber somewhat similar to cassava, and cut it into matchstick-size pieces. If you’re feeling a bit lazier, thin moon-shaped slices would do the trick.

If you haven’t worked with nagaimo much before, you may want to wear gloves when peeling it; some people have a bit of a itchy skin reaction to the peel. For some reason, this has never caused me trouble, so I like to live dangerously.

Then, you do very little: mix in some umezu, and maybe a little chiffonade of shiso. That’s it, you’re done. If you want it to be a little more visually obvious, you might add a touch of mild rice vinegar and a drop or two of red food coloring, but I don’t find that necessary; I just serve it in a pink Hagi ware bowl to provide a visual hint.

Umeboshi have a really intense flavor, but the flavor is a little more subdued in the case of umezu. When used to season the nagaimo, this simple side dish provides an excellent contrast to other conventional home-style Japanese foods, or to the heartier fare typically served at an izakaya, because it’s crunchy and raw and sharp-tasting.

On its own, nagaimo is crunchy but mucilaginous (I prefer the onomatopoeic Japanese word neba-neba because I can't recall the last time I said "mucilaginous" in English), and it's one of very few vegetables frequently served raw in Japanese cuisine. It gets stickier as you stir it, much like chopped okra or nattou; the effect was more obvious in this gochujang-flavored preparation.

The vegetable is almost sweet, but it has a very high water content, so it doesn't have a really strong flavor by itself. That makes it a prime candidate for salad-like preparations like this one.