The fascinating thing about squash soups is how absolutely minimalist they can be. Many years ago, an acquaintance of mine from Quebec served me a butternut squash soup that was really little more than a thinned puree topped with a little cream, but it was still fantastic.

The one I usually make has a little more complexity, but I still take a rather restrained approach to seasoning it. I like to take advantage of nuttier, mealy squashes to get the most flavor. 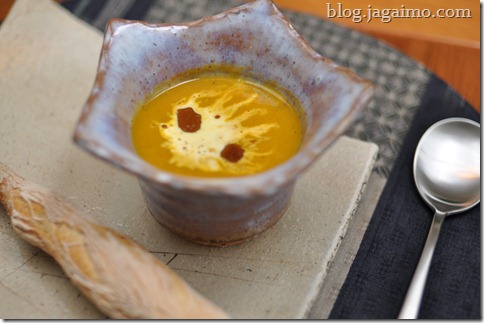 Kabocha fits the bill nicely. I used to go through the trouble of halving and seeding the squash before working with it, but I’m happier now sticking the squash in the oven whole and roasting it until tender. When it softens up, slicing through the beast is no longer a chore, and it’s relatively easy to extract the seeds and guts after a couple of minutes of cooling.

While the squash is roasting, I prepare a mirepoix, nothing more than equal amounts onion, carrot and celery sautéed until tender. Once soft, I puree the soup base in a blender, where it takes on an orange hue that could almost pass for squash itself. 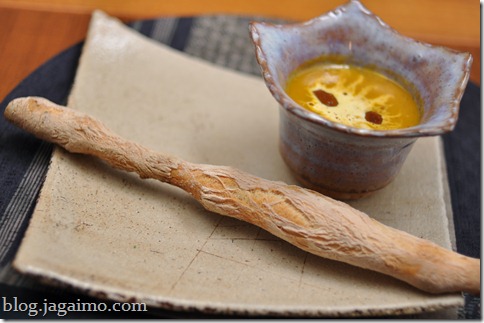 The roasted squash also takes a whirl in the blender, with a little water added as needed. Everything goes into a big pot, and I adjust the liquid ratio to make the soup to whatever consistency the occasion calls for… in this case, I was after a light pre-dinner soup, so I made it fairly thin.

This time I seasoned the soup with a small amount of a berbere seasoning blend, which has all the spices Americans love with squash (cloves, ginger, allspice) as well as a little coriander and ajwain seeds. It’s just cooked in a bit of butter in a tiny skillet until fragrant, and I pour it over the soup and stir it in. I then adjusted the salt and, in this case, added a touch of sugar.

My absolute favorite thing to complete squash is sage brown butter. This requires nothing more than a stick of butter and 10-12 leaves of fresh sage, cooked at medium heat until the leaves get crispy. You extract the leaves as soon as they’re crunchy and let the oil drip away, but you want to keep cooking the butter until it takes on the color of a hazelnut shell. It adds a fantastic aroma to anything it touches, and you can use the fried leaves as a savory garnish if you like.

You can serve the soup with a touch of cream and a few drops of the brown butter. I served mine with a little breadstick made from my potato pizza dough.

(Thanks to Kate Hailey at Spirited Earth for helping us figure out our new camera and making the lighting work!)