Hiromi planned lunch with a few friends at Yurakucho yesterday, so we went a little early and shopped a bit at the Wakayama specialty shop and an Okinawan store to pick up some umeboshi, awamori, and various snacks and treats.

After browsing shelves full of tofuyo, Hiromi was in the mood to eat something Ryukyuan, so it was a fortunate coincidence that our group stumbled on an Okinawan restaurant in a nearby department store building.

Indulging my vegetarian habit in Japan is essentially impossible, at least with any degree of rigidity. But Okinawan food is even trickier. (More impossible?)

With a heavy reliance on pork wherever an excuse can be made to use it, even a basic noodle dish is served with hefty portions of tender braised pork belly (buta no kaku ni). Hiromi orders Okinawan soba as part of a set meal, and discovers that Okinawan soba is somewhere between ramen and udon in texture, and is made entirely of wheat flour, with poetic license much like "chuuka soba" or "yakisoba."

The buta no kaku ni is lighter in color than the typical Japanese version, thanks largely to eithered reduced quantities or the complete absence of soy sauce.

Normally, making substitutions at lunch is impossible, as it severely messes with the kitchen's mojo during the business lunch hour. But we came a little after 1pm, and the restaurant said they'd be happy to cook something off the dinner menu if I couldn't find something suitable from the lunch menu.

So we ordered the closest things to vegetarian dishes we could find.

First up was nigana no shiro-ae, made with a bitter herb indigenous to Okinawa. Nigana is a somewhat ambiguous term in Japan, but in Okinawa it seems to refer to one local species of plant. I was expecting this to be more of a vegetable dish than a tofu dish, but considering the intensity of the flavor, the proportion of tofu to herb made sense.

I can't quite place the flavor, but it would be somewhat fair to compare it to arugula or maybe dandelion greens.

Another dish, recommended by one of Hiromi's friends, was a soft tofu dish called yuri-doufu, somewhere between oborodoufu and kinugoshi-doufu in texture. It's quite similar to Korean-style soon-dubu. The soup it's served with is far from vegetarian, but was mild in flavor. 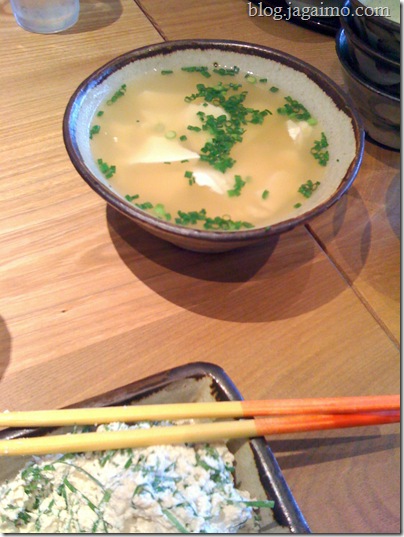 I had another dish called hirayachi, an Okinawan-style pancake comparable to a the simplest Korean pajeon, but described in Japanese as "Okinawan okonomiyaki." 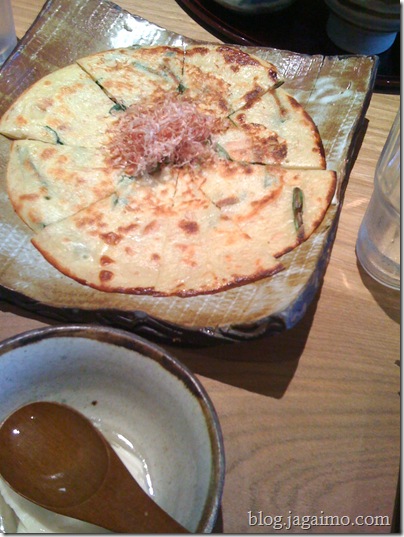 Unlike pajeon, the hirayachi I had did not contain scallions. The Okinawan dish is often made with nira, usually translated as garlic chives, an essential ingredient for making gyoza. I think there may have been a few pieces of tiny dried shrimp in the batter or maybe finely chopped kamaboko, and it's topped with katsuobushi, but I retain a sense of humor when dining out, especially in Japan.

The pancake is served with substantial portion of a mild soy-based dipping sauce, much less salty than the typical Korean equivalent. It's very simple, and since it's so thin, it probably just takes a few minutes to cook, but I like it.

We lingered long enough that it was already coffee hour when we finished, so we stopped and had some espresso-based drinks at some concept chain from the Illy brand. I ordered some odd (but actually nice) stuffed marshmallow concoctions, one made with tomato jam and the other flavored with coffee, as a little sweet thing.