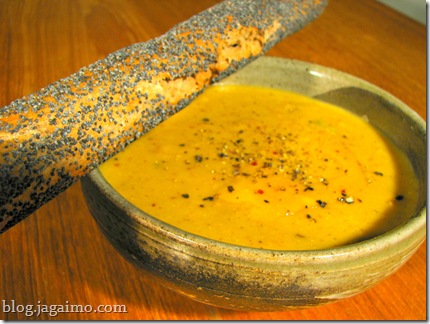 Soups aren't the sexiest food in the world.

But they can be seriously comforting.

This spring, Seattle has frequently been visited by unwelcome blustery, unpredictable spring weather, punctuated by misleadingly clear and balmy days that invite unfortunate delusions... During such moments, Seattlelites indulge vivid fantasies of leisurely walks around Greenlake that won't be interrupted by a sudden downpour, only to be disappointed by the harsh reality of rapidly encroaching storm-clouds after hours of deceptive partly sunny skies.

And those of us who are fooled, as all Northwesterners want to be, find ourselves shivering and craving the comforts of winter.

Even if it is April.

I gently roasted golden cauliflower in the oven, knowing that the next unseasonably cold day could strike as soon as tomorrow. I prepared a dark blonde roux of butter and flour, stirred in minced onions and garlic, then worked  in some milk and soup stock. I realized that I needed a bit more liquid, so I called to duty a bottle of stale beer left since I last entertained people who, unlike myself, like to drink hoppy fermented beverages. I added some ground mustard and celery seeds.

I took some cannellini beans cooked overnight in a slow cooker and pureed them in a blender, added them to the stockpot. After things simmered for a while, I incorporated the roasted cauliflower, and ultimately added plenty of sharp white cheddar.

White cheddar. Yes. Like the partly sunny skies of spring in Seattle, the yellow color of this soup is, in fact, a deception.

I was not pleased when my lovely smelling soup took on an unpleasantly beige color, likely thanks to the perhaps-too-dark roux and the white beans.

So I improvised, as one does.

I have a plentiful supply of annatto seeds, which are, in fact, the same source of coloring used in the aggressively orange cheddar sold in massive loaves at most supermarkets.

I cooked a fair tablespoon in a heavy dose of oil on medium-low heat, until the sizzling annatto seeds produced a pleasing aroma and colored the oil.I strained the oil and incorporated it into the pot of soup, and the color became... well... eerily orange. But I suppose that's better than beige.

On this first serving of the soup, I drizzled a bit of argan oil onto the surface of the soup. This proved to be wholely unnecessary, as the soup had sufficient depth of flavor that the nutty aroma was merely a slightly expensive distraction. When I brought the leftover soup to work for lunch, I didn't even consider such pointless additions.  The freshly ground pepper, on the other hand, was far more well-considered.

The cheddar and beer provided a well-balanced complexity, and the white beans contributed plenty of protein and fiber. The soup had just a hint of the onions and garlic, which added body and aroma without dominating the flavor.

I served the soup with a whole-wheat breadstick, whose dough I prepared the night before serving the soup. I retarded the yeast dough overnight in the refrigerator, and let it rise in a cool kitchen while I was at work. When I got home, I turned on the oven, formed several long cylinders from the dough, and brushed each with a bit of milk. (An egg wash would have worked equally well). I rolled each breadstick in plenty of poppy seeds, and baked them at 425°F about 15-20 minutes, until they were crisp and golden outside and reasonably moist inside.