Black-eyed pea cakes, snatched from the jaws of defeat 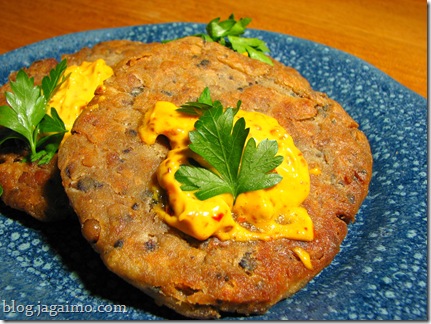 Trying to be clever sometimes gets me into trouble.

I was planning to make a soup this week. I thought it would be a good idea to cook some black-eyed peas one night ahead of time, so that I'd be able to eat dinner at a reasonable hour when I went to prepare the soup the next evening.

I didn't soak the beans earlier in the day, so I pulled out my 70s-era slow cooker after dinner, and let it do its thing. Clever, yes?

Just before bedtime, I went to check on the peas. Disaster had struck.

The peas were way overcooked. The soup I had in mind was not based on a puree. Of course, I didn't want to let the effort, or the food, go to waste.

A small disaster, yes, but I was disappointed. I lose interest in hearty soups the moment warm weather takes hold in Seattle, and there's not much time left before that happens (he says hopefully).

A rescue operation was in order.

I remembered having a sort of black-eyed pea hoppin' john (or is that johnnycake?) at Seattle's Kingfish Cafe several years ago, and then I thought that these overcooked beans might have a second chance at life. Not being a Southerner, in spite of a couple of years living in Knoxville, TN as a teenager, I'm not the right person to ask how to make the "real" thing, but I ground up a bunch of cumin, a little coriander seed, and even a touch of dried gobo (burdock root), only the first of which is terribly likely in any Southern version of this dish.

Although the beans were already pretty well mashed on their own, I used a fork on a little over half of the beans to make them a little more likely to hold together, and then worked in a couple of eggs, some panko, the spices, and salt.

The only kind of cornmeal I have around is instant masa, so I went ahead and used regular flour (an early experiment with the masa wasn't promising). I formed the bean mixture into patties, dusted each patty with the flour, and placed them one-by-one in an hot cast-iron pan. I used plenty of oil, more than coating the bottom of the pan, but not so much that the patties would be floating in it.

The patties are cooked until just a bit beyond golden brown.

To serve, I mixed up some harissa, a chili and garlic mixture with cumin, coriander, and a bit of olive oil, with some prepared mayonnaise. This went on each patty rather artlessly, as my squeeze bottle's tip fractured, leaving me to resort to a spoon.  A little parsley made it almost look pretty.

From a near fiasco, I had a very high protein, fairly flavorful dish, built from the humblest of ingredients. Sometimes failure is rewarding.