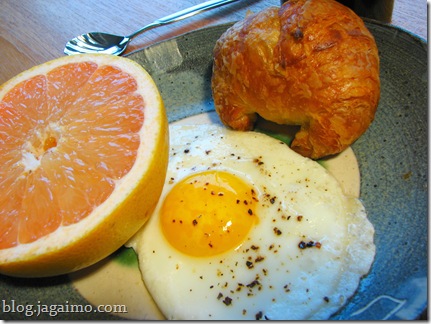 A couple of weeks ago Matthew Amster-Burton wrote about some frozen croissant dough which Trader Joe's now carries, and gave the product the thumbs up.

I thought it would be nice to do breakfast at home this morning, so I decided to give them a try. All I did was put out a couple on a sandwiched aluminum cookie sheet last night, then I woke up, preheated the oven, and baked them for a little under 20 minutes. They reminded me of the quality of croissants I found at average chain bakeries in Tokyo, which is pretty good. If I walked down the street to one of the coffee shops in my neighborhood, I'd have croissants with no crunch, a victim of transport... they resemble dinner rolls more than croissants, even though they come from a reasonably decent bakery.

The Trader Joe's version were also just the right size... I usually want two pastries just for variety's sake, but in the typical portion sizes in the U.S. that's a prescription for a heart attack, or at least some substantial weight gain. These ones work out to be 150 kCal a piece, assuming you don't slather too much in the way of toppings on them. I ate two with some kaya custard, so it wasn't exactly diet food, but I should live to see tomorrow.

Cafe Besalu is an occasional (frequent?) weekend indulgence for me, and their laminated pastries are hard to beat, but there's something to be said for being able to eat freshly baked croissants in your bathrobe.

Even though I like eating well on my own, I tend to keep breakfast and brunch rather basic, so I thought it would be good to have some more good stuff that required little work.

I had half a grapefruit from Harbor Island Citrus in Florida, which I picked up at Sosio's. These grapefruits were labeled in Japanese with the phrase 「糖度センサー使用」, which means that they are sugar-tested with a brix sensor (yours for just $3000, or $9000 if you want the melon-testing model). They're sweet, but also incredibly full-flavored. Thanks to the label, I discovered that this grapefruit is exported to and sold in Japan (at least online), and are actually fairly reasonably priced... not much different than I paid, and slightly cheaper in quantity.

The season's pretty short, so I bought a couple more this weekend, just in case it's my last chance. They might have them for another week at Sosio's downtown; I was told that there are only about 40-50 cases left in the country.

I also had a sunny-side up egg with truffle salt, making a simple but luxurious breakfast. Sometimes it's good to stay home.