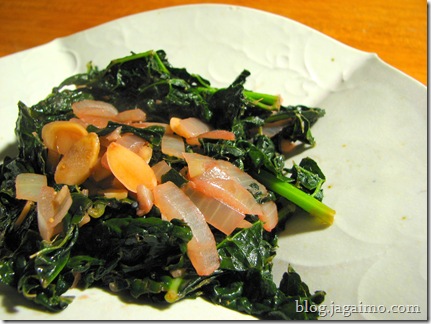 As a small child, I already had vegetarian leanings, and generally refused red meat. Then, one night, my parents and I went out to dinner at their favorite nearby "fancy" restaurant, a Black Angus, where, without warning or provocation, I placed my order for prime rib.

The waitress was taken aback, as that was a pricey cut of meat for a 3 or 4 year old in the 7 Especially at a restaurant. She checked with my parents, who said "if that's what he wants, give it to him." My mother was surprised and, apparently, somewhat relieved, and she figured it was best to indulge me on a rare occasion when I was willing to entertain the idea of eating meat. Even if that meant that I was condemned to have expensive taste for the rest of my life.

While I did eschew meat, I still hadn't overcome the typical childhood fear of salads and bitter greens. During the same period that I was refusing red meat, I was equally hostile to eating salad, even though the standard salad in the 70s was a mound of nearly flavorless iceberg lettuce drenched in about a pound of Thousand Island dressing. Reportedly, my reaction to being served salad (quite possibly with that very same steak) was to say, "I can't eat that, it might kill me!"

In retrospect, maybe I was on to something. Although I warmed to that style of salad in my junior high school and high school years, it only took a couple years beyond that before I couldn't imagine a salad with anything less flavorful than romaine, nor any dressing poured heavily enough to resemble a lettuce soup. And I now generally reserve Thousand Island dressing for its divinely intended purpose: as a sauce for french fries.

Artery-clogging quantities of mayonnaise do not belong in something ostensibly healthy; they belong right out in the open, served with something you expect to be bad for you*.

So what does steak and expensive taste have to do with kale? Well, a little bundle of kale in the supermarket runs over $3, which is probably more than a pound of prime rib would have cost in the supermarket during the 1970s. That's about three times the price of spinach. (Or maybe not... spinach has been expensive of late, too).

How interesting that kale, a much feared vegetable by even reasonably adventurous cooks, is nearly a luxury item.

And yet, treated reasonably well, kale is a remarkably flavorful and pleasing green. Most of the hard work of washing the kale is done for you, at least as far as I've seen; I still give the greens a bath in a big bowl of water and let any sediment settle to the bottom. I separate the tender leaves from the sturdiest parts of the ribs by ripping the leaves along either side of the rib.

Then I usually do a quick braise with good, gently heated olive oil, garlic, a little bit of flavorful vinegar or a squeeze of lemon juice, and sometimes some wine. This time, I actually started with quick-sauteed onions, cooked down the kale a bit, and added a heavy splash of red wine and a little lemon juice, along with some sliced, toasted almonds. I added just enough salt to bring out the flavor of the greens, and to let everything cook for a few minutes to let the wine and kale come together.

Kale is certainly more bitter than spinach, but it stands up to longer periods of cooking than spinach tolerates, allowing for more intensely flavored creations. The red wine-olive oil combination creates a beady, tangy sauce, brightened up by the acidity of the lemon. The almonds add a little textural contrast, though they'd be more flavorful if freshly toasted and used as a garnish.

Along with a few other plates of more substantial fare, the kale adds a massive boost of Vitamin A and other nutrients, but my fork keeps wandering back to this plate for the flavor.

And it won't kill me.

* I reserve the right to inconsistency when you later catch me eating copious quantities of my homemade citrusy mayonnaise with theoretically healthy artichokes.