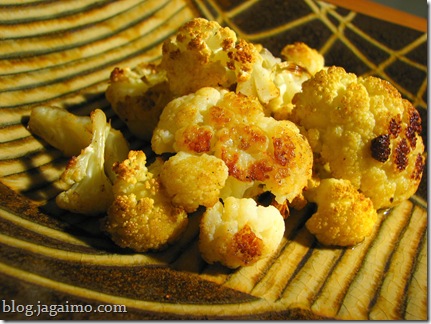 Cauliflower soup may look homely, but the most minimalist preparation of roasted cauliflower can still make heads turn.

Roasted cauliflower became trendy a few years back, and I fell in love with it long ago. In my kitchen, it's become such a common fixture at when I bring home cauliflower that I never give it much thought.

It's certainly fun to play with the basic ingredients. Sometimes I add a few pine nuts in the last few minutes of baking; maybe a splash of wine and a few currants; perhaps some herbs.

But roasted cauliflower is equally satisfying at its simplest. I usually slice the head of cauliflower or break it into florets, then I do little more than add a generous sprinkling of olive oil and salt.

This time, I used some Korean bamboo salt and a little bit of Spanish paprika. The bamboo salt that I used has a small amount of a Korean herb incorporated into the blend, but the flavor is very subtle, if it's recognizable at all. The Spanish paprika adds a pleasingly smoky quality and a sweet aroma.

Roasted at 375F until golden, the cauliflower requires little attention. I usually flip over the florets once or twice, usually after each 15-20 minutes in the oven. I usually bake it somewhere around 40 minutes in total, sometimes a little longer. Most vegetables don't hold up to long periods of cooking, but cauliflower is an exception.

The best thing about roasted cauliflower is that it only takes two or three minutes to prepare, and you can let the oven do the hard work while you're preparing the rest of the night's dinner.

When the cauliflower is finished, it becomes soft and inexplicably sweet. You can serve it naked, like I did, or, if that's not exciting enough for you, it goes nicely with a little tsatziki or aioli.