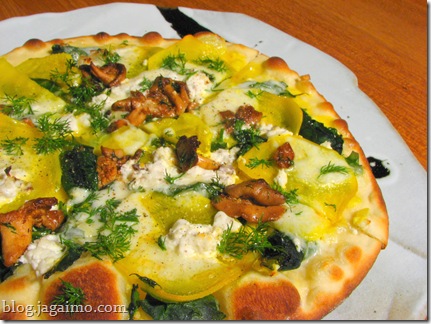 OK, chanterelle season is more than over. What can I say? I've been busy.

I made this back in December, so you'll probably need to make something slightly different. Maybe you can substitute some hedgehogs or skip the mushrooms if something suitably foresty isn't available.

All I can say is that this worked. I blanched thinly-sliced golden beets, followed by the beet greens. Then, I dry-fried chanterelles with a bit of salt and fresh dill, feeding them some butter after most of the liquid had boiled off.

I put these on a pizza dough base brushed with olive-oil and garlic. The cheese included a little orange-fennel soft goat cheese and mozzarella.

When the pizza was finished baking, I hit it generously with more fresh dill.

It's not Italian, but it works. I particularly liked the little hints of orange aroma coming from the cheese, but I think other soft chevre would add a nice brightness that would balance out the earthy foundation.