I've previously mentioned that Hiromi's pie crust is far superior to mine. Hers is closer to a rough puff than the standard American pie crust, but she pulls it off rather effortlessly. On the other hand, my attempts at rough puff generally turn out to be slightly inferior to the basic pie crust that I can produce with far less concentration..

During Hiromi's short stay, I wanted to take advantage of Hiromi's crust-making skills for a more savory application. 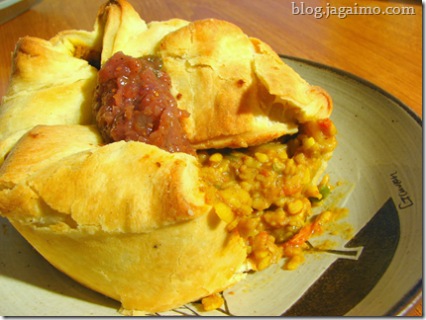 I worked on a simple thick lentil dish made with garam masala, probably a few potatoes, onions, garlic, and ginger, some fresh tomatoes, and turmeric. As I recall, I only had split urad daal handy. These are black lentils which have lost their shells and become a sort of drywall white.

While I was taking care of the filling, Hiromi set out making the pie crust. She cut in the butter and prepared the first turn, and finished a second one before the lentils were done.

We wanted some kind of sweet-savory accompaniment, so I planned to make a chutney. Fresh figs looked nice that day, so we used them as the foundation. I prepared the chutney after the lentils were started, using a little fenugreek and fennel as the dominant notes, a little extra sugar, and a few additional spices. I think I added enough chilies to make the chutney more spicy than necessary, but they didn't hurt.

I'm already fuzzy on the details, but I think we had some other afternoon plan that day and we wandered off for a few hours, then came back to assemble everything. I think Hiromi did one more turn before we filled the pastry in small springform pans, baked, and then were treated to this nice pie.

The only thing I'd change is which fruit to use for the chutney. I think apricot, peach or tamarind would be a better compliment to the heavy lentils, especially on a fairly warm day. The chutney itself was very pleasing, but perhaps it would work better with a less rich accompaniment.