I'm a complete sucker for simple preparations of nice ingredients.

It wasn't always that way. When I first had enough of an income to support occasional dining out, I always thought it was better to order food that required equipment or effort I was unlikely to duplicate at home. Why pay a premium for a dish I could throw together myself in just a few minutes?

But after a couple of years, I realized that complex cuisine tended to be disappointing, perhaps because so many variables made it hard to pull off "sophisticated" dishes with any degree of consistency. Now I tend to be happiest with simple, well-executed fare. I still love dining out, but I'm more likely to look for dishes that are simple and playful, or classically basic and seasonally appropriate, rather than elaborate or ostentatiously creative.

At home I've seriously simplified my usual fare, as well, and I just love doing as little as possible to bring out the best in an ingredient.

Chayote squash is one ingredient that benefits from pronounced yet fundamentally uncomplicated seasoning. I like it with little more than fresh citrus juice and salt. 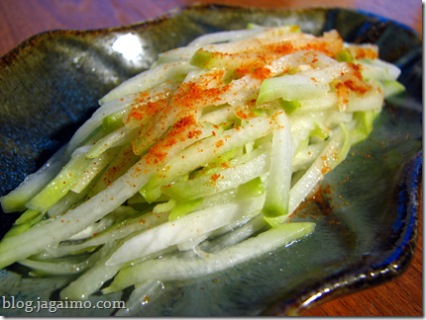 Except for some brief high-risk mandoline maneuvering, this refreshing side dish is almost effortless. I simply matchstick cut the squash, rub the pieces with some coarse salt, and wait a few minutes for the squash to sweat while preparing something else.

I try to squeeze out excess moisture, but it's ok to be a little lazy about that. Then I squeeze in a generous splash of fresh lime juice and chill for a while to marinate. If the squash starts out cold, it could actually be eaten right away, but I didn't have that much forethought. I just let it rest for a while while I finished the rest of dinner. Besides, it keeps nicely for three or four days refrigerated, and it's nice to have a refreshing side ready to go.

On the plate, I sprinkle just a little pico de gallo seasoning, which is nothing more than salt, ground cumin, and chili. If this dish sounds like a typical preparation of jicama, that's no coincidence. It just works.

Chayote squash has the texture of a crisp pear or raw daikon but has hints of the aroma of cucumbers and melon.  When you add the lime juice, the magic starts.