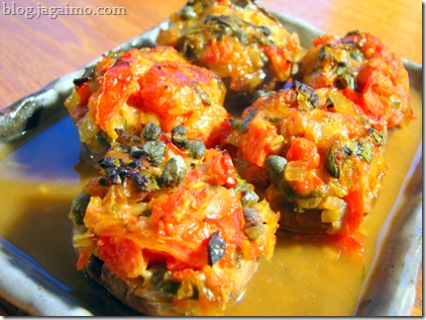 Perhaps it's just force of habit, but I  never really considered making stuffed mushrooms without some sort of starch as a foundation... rice is my usual standby, but I've used buckwheat, breadcrumbs, and a few other alternatives.

But I'd been feeling rather overstuffed lately, so I've been eating less in the way of refined grains than usual. Stuffed mushrooms are a relatively quick, simple side dish unless you're cooking them for an army, so I threw together a dozen or so one Sunday night recently to go along with some more substantial fare.

I took some fleshy tomatoes, gently seeded, and chopped them up, tossed with some chopped, sauteed shallots. I added some grated pungent cheese whose name escapes me at the moment, but almost anything would work. For flavor, I added some capers, and a little salt, pepper and nutmeg. After hollowing out the mushrooms, I stuff them with the filling, placing them in a porcelain baking pan. Then pour some light, minerally Grüner Veltlinger wine, seasoned with more salt, pepper and nutmeg, into the same pan with a little butter.

These bake until the mushrooms look tender and the cheese is melted. at about 425F/200C.

I was worried some disaster would befall me because I left out the usual ingredient binding, but no such misfortune ensued, and the dish avoided the dreary dryness that sometimes ruins otherwise elegant-looking stuffed vegetables. Now I'm inclined to leave out the starch most of the time.

In spite of the stick-to-your ribs look of this variation, it's quite light and flavorful, and you could probably eat the mushrooms by the dozen without weighing yourself down.

Served with a glass of that Austrian Grüner Veltlinger, they make a nice starter or side dish.