Sorry for my absence the last couple of weeks. Did you miss me?

I've been a bit distracted.

Hiromi and I have been quietly planning to marry in September in Japan... most of our friends and family have known about it for a while, though I haven't been shouting it from rooftops...

I guess it's time for that to change.

In the lobby of Seattle Municipal Courthouse

A little over five years ago, I met Hiromi in person for the first time while on business for Microsoft in Japan. We weren't really working together directly on anything at that time, but several people from the MSN Japan team went to lunch at Misato-ya in Chofu with me, and Hiromi may have been the person to suggest that we go to the popular organic vegetable teishoku restaurant whose korokke and unpredictable okazu I still crave. I'm pretty sure I spent all of lunch talking about food, cooking and ceramics, probably exhausting anyone who wasn't interested in my personal obsessions.

On another trip that year, Hiromi wasn't even in the office. She had been surprised by a brain tumor and was unable to work for a while while it was being treated.

Somehow Hiromi remembered me a couple years later when we started working on something together. It's rather embarrassing to admit now, but at first I wasn't entirely sure which Hiromi I was working with. There were two contractors named Hiromi on the team back then.

Anyway, I planned a little vacation to Japan after about a year without any business travel. Hiromi invited me to meet up with her on a trip I made to Japan in 2003. We had dinner together one night, and then went touring around Yokohama on another.

I owe my entire relationship with her to my clumsiness... While we were walking around in Yokohama, I nearly ran into a post in the middle of a shopping center, she grabbed my hand to pull me out of the way, and never let go. The wind and rain that day was furious, and a brief trip outside left us chilly and well-soaked. Our lives would be permanently intertwined that day, though I don't think either one of us really knew it then.

In Chambers with Judge Judith Hightower 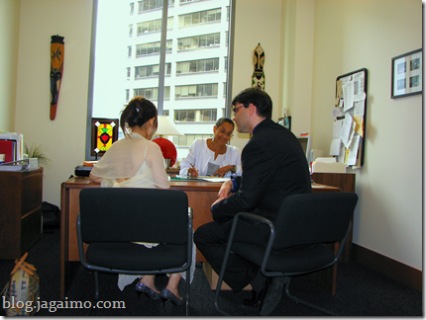 I didn't really deserve her... I sent all sorts of mixed messages when we first started dating. I was conflicted about starting up a long distance relationship, as I'm sure she was. It took more than a year of trips back and forth before we removed all the ambiguity. Yet somehow she stuck with me.

Things evolved, and Hiromi decided to come to Seattle to take some classes so that we could get to know each other better. Somehow she didn't become bored of me. I don't know how I managed to keep her interested. I wasn't at my best. I was, as now, juggling a day job and my fledgling internet business, more exhausted than usual, and occasionally a bit depressed that I couldn't devote all my energies to that project. But we stayed together, and it became harder and harder for me to imagine my life without her.

We seriously started thinking about marriage, but neither of us was in great financial shape. She went back to Japan, after a little under a year in Seattle, so that she could start earning some money again. I started saving money while paying down some business debt.

At the time, it seemed like it was best to marry in Japan and arrange for the immigration paperwork there. Perhaps a bit sentimentally, we picked the anniversary of the day that I nearly walked into a pole in Yokohama, which coincidentally turned out to be a taian day this year, an auspicious day for a wedding.

Then immigration policies changed again, and we learned we wouldn't be able to start the process of bring Hiromi back to Seattle until after I would return to Seattle after our September wedding... And at first we were just resigned to a fate of things taking longer.

I had a little conversation with my attorney earlier in July to discuss our plans, and he said it was too bad we didn't just get married when Hiromi was still in town. If we weren't hung up on the date, he said, we might have been able to speed things up by starting the application process a bit earlier. I realized that she'd be in Seattle briefly after attending a dance workshop in California, and we started discussing having a simpler municipal wedding before our bigger family ceremony next month.

Well, that's what we did... perhaps a bit hurried... Hiromi's ring won't even be ready until just before I go to Japan, and we haven't figured out mine yet. The judge kindly provided symbolic rings for the ceremony.

There's still a long way to go before we're really together, but now the end of our long time living apart is finally in view. 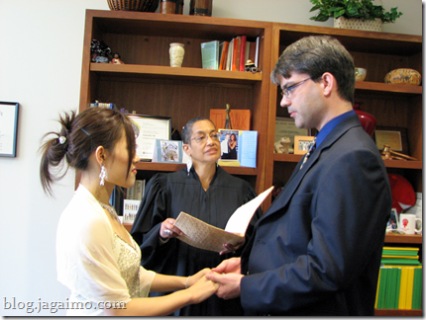 Ron Mamiya, the presiding judge of Seattle's Municipal Court, had requested to do our ceremony because he shares Hiromi's family name, but Hiromi's tight schedule meant she'd be gone before he returned from his own vacation. Instead, the Honorable Judith Hightower took care of our ceremony in her chambers. She kindly indulged us taking lots of photos, actively encouraging the two camera-wielding witnesses to move about the room for the best possible angles. She even took a few shots of our group together. 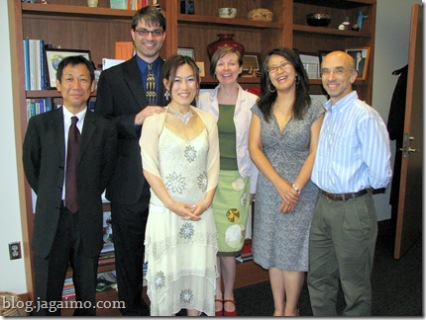 After the ceremony, on the steps of the courthouse 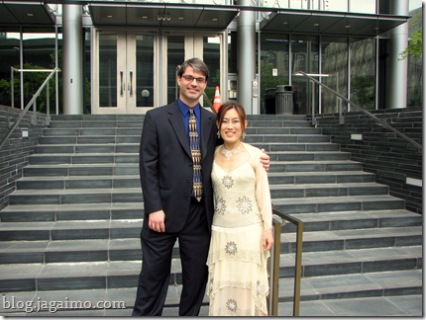 Unfortunately, this was also one of the briefest trips Hiromi's ever made to Seattle, and we didn't really have a lot of time to enjoy each other's company after the wedding. We had a little dinner with Jennifer and we came home early in the evening. We only had one night before I had to take Hiromi to the airport.

This was the most painful trip to the airport I've ever made.

I don't remember us posing for this 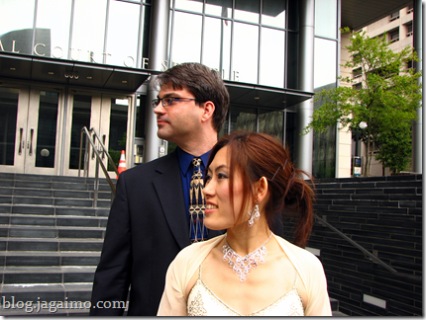 Fortunately, I'll be in Japan again in just over a month. There's still a lot of planning to do, and I'm not sure how we'll get everything all done by then, but I'm sure we'll figure things out. 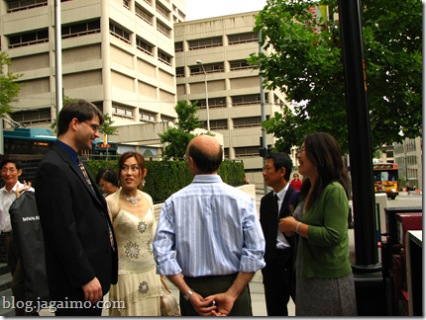 I was surprised at how much this small ceremony changed the way I look at Hiromi. I was completely inarticulate on our way outside the courthouse afterward, but a thousand thoughts were racing around my head. Even at my worst, most selfish moments, I haven't been able to imagine my life without Hiromi for a long time, but everything became so real to me all at once. I was more than a little overwhelmed... after going to the airport yesterday, I was completely useless for the rest of the day.