So crowded nobody goes there anymore

Over the weekend Seattle Center hosted its annual spectacle of mediocre food. I almost completely forgot it was set to happen until I spotted a note about it in one of the Seattle weekly papers late in the week.

My left foot is still easily inflamed, so I didn't go, but I'm not sure I would have expended any more effort had circumstances been more favorable.

Perhaps I'm the only one, but Bite of Seattle no longer holds the same appeal to me it once did. Last year, Hiromi and I kept fairly busy attending most of the notable Seattle festivals, from Folklife to the Solstice Parade, from the Pride Parade to Bumbershoot. We even hit the Seattle Cheese Festival, accidentally found ourselves at a Leavenworth, WA parade, and even unexpectedly found ourselves at a hydroplane event on our way to Sol Duc in the Olympic Peninsula.

But I'm fairly sure we skipped what is ostensibly the most food-centric event of the year: The annual Bite of Seattle. Near as I can tell, we stayed home and grilled peaches and made falafel.

It's probably been two or three years since I last attended the Bite. The prospect of braving large crowds of people standing in long lines waiting for almost exactly the same food that appears at ever other summer event in the region no longer holds much appeal for me.

Sure, they have the semi-fancy John Hinterberger/Kathy Casey/Tom Douglas circuit (the featured Seattle food personality changes year-to-year), but I don't think the festival does much to highlight Seattle-area restaurants anymore.

It takes almost $3000 just to rent space for the booth for the weekend, not to mention all of the equipment and staffing costs, so I think most of the interesting restaurants in Seattle have been opting out. It's a shame, because as far as I understand, the event originally had the aim of promoting local restaurants, rather than being a place to get standard greasy fair grub.

When I look at the restaurant list this year, it seems that a fair number of "real" restaurants are on the list, but even most of those are fixtures of the festival event circuit. Aside from those few spots, I think I've seen enough of Biringer Farms semi-frozen hyper-sweet strawberry shortcake, Ziegler's curly fries, Shishkaberrys skewered chocolate dipped fruits and Scotty's seafood sandwiches. It doesn't look like even a handful of the restaurants are the kind of chef-owner-operated places that make eating in Seattle interesting and remarkable.

You can't even get a decent cup of coffee at the event thanks to sponsorship restrictions. In Seattle. Why even bother showing up?

I must be idealizing the event somewhat, because even thinking back to when I first went to Bite of Seattle in 1996 or 1997 or so, I can't think of any remarkable restaurants that I was introduced to via the festival. But I do think it was more exciting for me back then. Have I just become jaded, or did the "Bite" once have more bite?

What else to do? 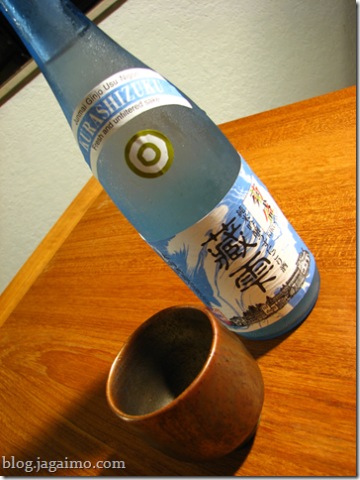 Fortunately, Seattle is vibrant enough that we have other things going on even during major festivals. Sakenomi bravely opened a small sake retail shop in Pioneer Square, and had their grand opening event all Saturday afternoon. A friend of mine from my Japanese Meetup went with me to chat with the owners and to nibble on champagne grapes and cheese and crackers.

The shop is pleasantly unpretentious, and Johnnie and Taiko are working hard to make sake as accessible as possible. Our brief conversation made it clear just how few degrees of separation there are in Seattle's Japanese community... the store features sake ware from Akiko's Pottery and the staff wears T-shirts designed by Masa of Three Tree Tea.

Considering the location, I'm a bit surprised that they've made the choice to create more of a retail venue than a bar, but the interior is constructed in a way that they can probably evolve in that direction if it turns out to make more sense.

Pioneer Square is a difficult place to operate a retail shop. Even a lot of the galleries have been struggling as Pioneer Square loses its hold on the art buying public. I'm curious if it's possible to make money on a retail project down there that isn't a convenience store.

I wish them well... the space is cute and the environment is much more welcoming and apprachable than the average Asian market sake aisle.

I took home a nice bottle of semi-effervescent sake.