It's not that it doesn't exist; we only use it as a way of guaranteeing productivity, at offices and schools, or for keeping people restless and uncomfortable so that they'll make their purchases and efficiently move on to some other errand, like in supermarkets and department stores.

So the few times each year when we really would benefit from air conditioning at home, we simply don't have that option, so we tend to go out and drink mediocre syrupy iced cocktails at one of the three restaurants in town that has a deck. Today it was too hot for outdoor dining to be remotely comfortable, at least before 9pm or so.

During that time, I suppose we just sit at home and bake. 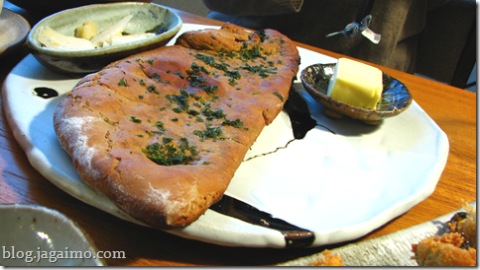 No, not like this. Turning on the oven in weather like today's is a truly awful idea. It merely contributes to the dreaded Seattle Warming. Our fragile Seattleite bodies are not able to handle 65°F high temperatures one day and 98°F highs three days later. This is why we have so many activists and scientists working on reversing global climate change.

So it's really a good thing that I made and served this bread over a week ago. It's been a little hot to do any serious blogging, much less baking... I'm sure you've seen a slightly lower productivity among Seattle bloggers in the last week or so, except from those who blog from air conditioned coffee shops.

Aside from a slightly disastrous transfer onto the baking stone (the focaccia was a little too long), and a slightly too crispy texture thanks to a minute or two of overbaking, this was a nice little bread. It was perfect with good butter, as well as with olive oil.

It's an ordinary focaccia dough, except for one distinct feature: It's made with one-third chestnut flour. This gives the bread a surprisingly rich character, and a long fermentation time added a deep complexity. The aroma of chestnut pervades the bread, although the end result is nothing like your average roasted chestnut or mont blanc pastry.

I brushed the dough with olive oil and topped it with a little chopped flat-leaf parsley.

On a day like today, I might be satisfied with little more than some bread and cheese.  Or, as Hiromi and I did on a hot day last summer, perhaps it would be nice to serve some sakuranbo sōmen in a bowl of ice water with a cold dipping sauce.

Instead, though, I went out for a cold cocktail and some watermelon carpaccio and panzanella style salad at Oliver's Twist, under the mistaken impression that they might have functioning air conditioning.

Apparently some Seattle restaurants don't believe in air conditioning, either.

But the icy drink, constantly refilled ice water, and cool salads helped... followed by another cold nibble or two at Gaspare outside as the sun started retreating for the night. Gaspare didn't invest in air conditioning either, so in today's sweltering heat, nobody sat down indoors... it would have been too dangerous.