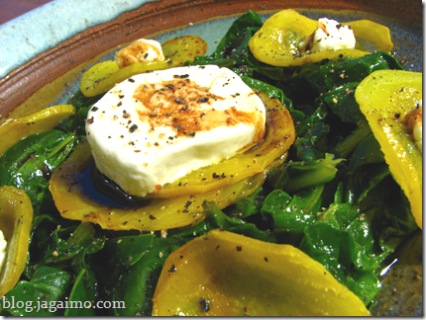 Long abused by the canned food industry, which has perfected the art of turning perfectly good beets into gelatinous salt licks, beets rarely get the attention they deserve. The best you can hope for, on average, is a nicely done borscht.

While I'm as big a borscht fan as anyone, I can only make it so often... I always end up with too much. I end up eating the borscht for days and days on end.

Not that there's anything wrong with that. But sometimes, I just crave a simple, refreshing dish to accompany the rest of my dinner. 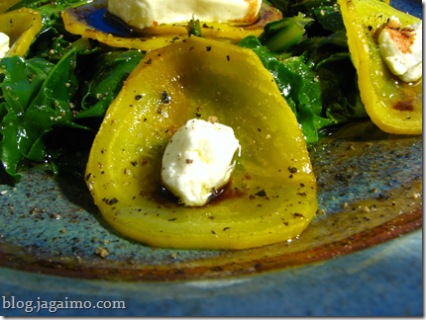 I had some nice golden beets with their fresh greens still attached, so I decided to blanch the greens as a base for the beets themselves. My greens were full of mud and required multiple baths in cold water, but once washed, they require just about 15 seconds in boiling, salted water. The water should be about as salty as the ocean, much like you'd season water for perfect pasta.

Drain and shock the greens with ice water.

The beets themselves can be sliced with a mandoline, or with a knife, if your knife skills are more consistent than mine. I put them on a Silpat mat on a baking sheet and baked the slices until tender, but not mushy, at 350˚F (about 175˚C).Without an oven handy, I might  carefully boil the beet slices instead. 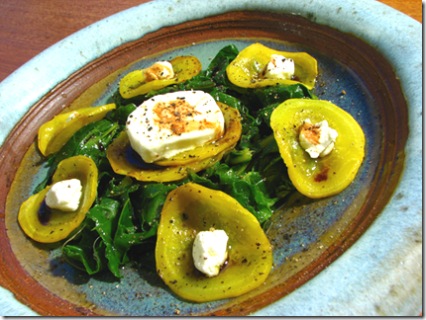 Taste the beet greens to make sure they have enough salt for your taste. If you like, you might toss them with a little vinegar to counter the slight bitterness of the leaves; I didn't feel the need for that.

Arrange the blanched leaves on a plate with the cooked beets.

Gently simmer slices of garlic on low heat with way too much olive oil for at least 5 minutes... don't let the garlic brown. Pour the olive oil all over the arrangement. Don't worry about the fact that you are using so much oil; it's mostly used to transfer the garlic flavor onto the greens and the beet slices. Certainly you consume some of that, but much of the oil will simply rest on the bottom of the plate.

I topped this with some soft chevre and a drizzling of real balsamic vinegar, and some freshly ground black pepper. This particular chevre is made from delightfully grassy spring goat's milk, and comes from Port Madison Farm on Bainbridge Island.