Yesterday, I mentioned a spicy nagaimo dish I served with that pretty tofu dish.

Although I tend to respect the traditions of the cuisines I borrow from, I'm not above mixing cuisines from time to time. I just don't tend to like the excesses of self-conscious fusion cuisine, often created by people who know next to nothing about the food or aesthetics of the countries from which they are borrowing.

I'm no genius in that regard... Although I'm reasonably well-traveled, I tend to rely on classic flavor pairings and a consciousness of the nature and function of my ingredients. While I might do some unconventional things, I don't really do fusion for the sake of shock or drama. Mostly I'm just adapting available ingredients to my situation (dinner tonight), which is pretty much how Italians figured out how to use the tomato or Koreans figured out how to make use of the chili.

Fortunately, Japanese and Korean ingredients and techniques can often be combined in simple ways without creating a culinary fiasco. It's not surprising to find some form of kimchi on a Japanese dinner table, for example. 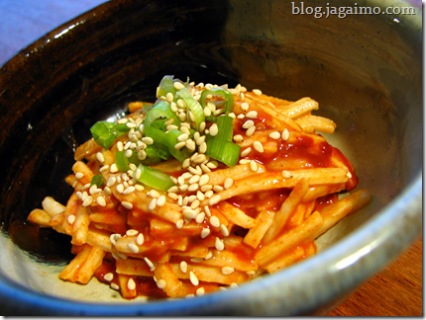 I had some nagaimo, a starchy tuber, also called ma in Korean. Although I'm quite happy just to serve nagaimo with a little nori and soy sauce, I thought it might be nice to make use of the artisan gochujang I picked up in Korea recently. This is a fermented sauce made with Korean chilies, rice, salt, and soybeans. It's a really great way to season any number of otherwise simple vegetable dishes.

Nagaimo is very sticky, or nebaneba, and the glutinous rice in gochujang also has a kind of sticky quality. I thought it would contribute some natural glutamates (umami) and a modest heat to the nagaimo, so I simply stirred it together with the nagaimo until the sticks were relatively evenly coated. As the nagaimo is stirred, its nebaneba qualities become increasingly apparent: small strands of starch stretch into longer strands.

Because of this, it's better to serve the nagaimo in a small bowl rather than on a plate. As you eat it, the strands tend to want to stay where they started, and you might find a bit of a trail if you try to pick them up... the edge of the bowl will help head that off, and an individual serving in a little bowl that you can pick up will help minimize any embarrassment that might be caused by spreading your food around the table.

I added a little scallion and toasted sesame seed to provide some simple flavor contrast.