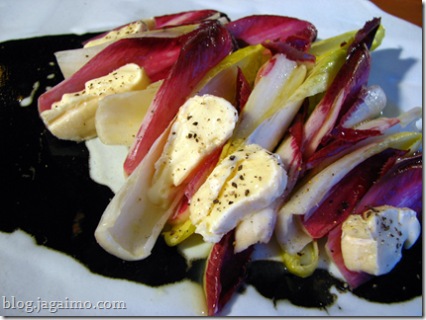 After a heavy breakfast and hearty lunch on a very lazy homebound Saturday, I thought it best to keep dinner lighter, so I had a big salad and a little more bread.

What did I have handy? Some Belgian endive, one bulb white and one red. A lime. Some tea seed oil, mustard, honey... That would work as a dressing. A little more of the robiola due latti from my unhealthy pizza fritti last weekend... not the most natural fit for this kind of salad, but at room temperature, it has a luxurious quality that certainly doesn't hurt.

When I was living in Germany many years ago, I was impressed at how big a full-scale German lunch was in contrast to relatively modest, mostly cold dinners. Granted, that's tradition: contemporary practice is all over the map. But many Germans still say they must eat "warm" for lunch and are perfectly content to have a simple evening meal of bread and cheese and sausage.

Sometimes I think it's better to eat that way... though I'm most in the mood to have a complete meal at dinner. I just don't feel comfortable taking two hours off of work to go make a nice lunch at home... in smaller towns in Germany, that was perfectly feasible.

But sometimes I just want to have something comforting and slightly refreshing.

Since I already had a big protein-rich lunch, some greens and cheese were perfectly in order. I didn't really have dinner until an insanely late 9:30 PM, so anything more elaborate would have probably been terribly overwhelming. This was just what I needed.