Garlic scapes with walnuts and parmesan 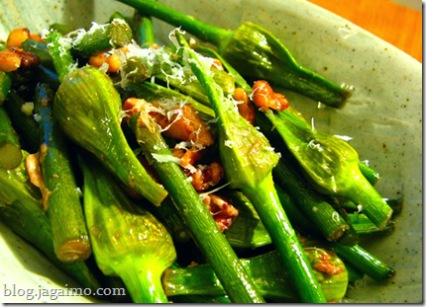 They apparently come from only a small number of varieties of garlic. I really like them, but I've found them slightly temperamental to cook: they seem to transform from slightly-too-hard to hopelessly mushy in mere seconds.

This time I managed to get the texture just about right.

When I'm giving them a more Japanese treatment, I tend to blanch them before using them, which helps keep the texture firm and the color brilliant.

This time, though, I simply sauteed the garlic stems of the scapes in olive oil with a generous pinch of salt, added some walnut pieces, and, toward the end of their time on the stove, I added the upper bulbs to the pan and poured in some vermouth. The bulbs take less time to cook than the rest of the vegetable, and tend to suffer the most from overcooking, so they should be cooked until just tender enough to enjoy.

I've bought garlic scapes in supermarkets in Japan, where they are called ninniku-me, but they are nearly always sold with the bulb cropped off. I think that's probably because the visual appeal has a longer shelf-life; the tips turn brown much earlier than the rest of the scapes.

Garlic scapes require only minimal seasoning: they are both an aromatic and a vegetable in one. If you take advantage of that attribute, you can have an excellent side dish on the table in just about three minutes...