Stuffed chilies, or chile relleno, are one of my favorite things in the world. They're typically cheese-laden and deep-fried in an egg meringue, and often drenched with a heavy sauce. All that fat is certainly part of the charm, but even a small serving is a serious caloric commitment.

It's not that I want to completely avoid the cheese, or even the pleasure of a creamy, spicy sauce. Sometimes I just want a less over-the-top indulgence.

So how does one apply a bit of restraint to a classic dish like chile relleno? 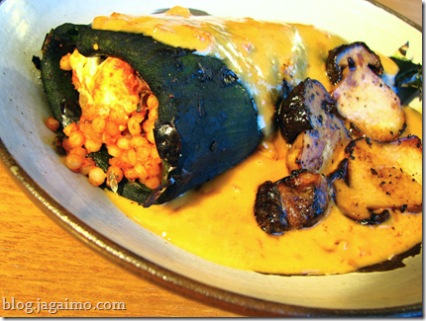 I originally thought I'd stuff these chilies with rice and cheese, but a slight change in plans required me to make a last-minute adjustment. I took advantage of some much faster-cooking couscous, which I splashed with some lime juice, tossed with some chopped mint and a little tomato puree, and mixed in a little soft chevre and a few pine nuts.

The chilies I flame-roasted until the skins turned black, and let them steam in a closed container to make the skin easier to peel. Finally, I carefully cut out the stem and seed the pepper. If I were frying these, I'd probably cut the chilies lengthwise and fold the walls so that they overlap, but in this case, I figured it would work better to fill the chilies from the top. They can be stuffed a little more aggressively than if I had to worry about things falling out in the fryer.

Once stuffed, I stuck the chilies in the oven to warm up for 10 or 15 minutes. While they were in the oven, I wanted to throw together a simple sauce that would provide some complexity and richness.

Since I was using a fairly mild chili, a pasilla, I wanted to bring up the heat a little bit, so I thought I'd do that with the help of the sauce. I soaked some dried chipotle, the slightly smoky, medium-spicy Mexican chilies, in hot water to soften up. When they were reasonably hydrated, I put them in a blender with some cream, a couple of sun-dried tomatoes, and a little garlic.

The sauce then just needs to be brought to a boil and simmered for a minute or two to thicken up.

Certainly not a low-fat creation, this variation just scales back the over-the-top excesses of the typical relleno, but it's creamy and flavorful and exciting.

There was one slight problem, however. 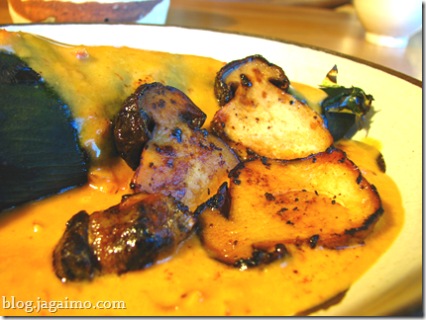 I had one last porcini mushroom left from my weekend shopping at the Pike Place Market, and I really needed to use it before it could get too dry. So I grilled it up and served the slices with the relleno... It certainly looks tasty, and it was, but it's a bit unfair to the porcini: The otherwise remarkable flavor of these pricy mushrooms was somewhat masked by the intense chipotle flavor of the cream sauce. In retrospect, I might have been better off just eating the porcini as a small plate with a mild salad. I suppose that some kind of spicier creations must be possible with porcini, but I think I'd be happier just having them on their own.