Beyond their slightly mustardy flavor, mizuna greens share some of the peppery character of arugula. I had a bit more mizuna with perhaps less than a day left in its usable lifespan, so I thought I really needed to find a way to make good use of it.

I still had some pizza dough retarded in the refrigerator from a few days ago, which can only hang on so much longer... 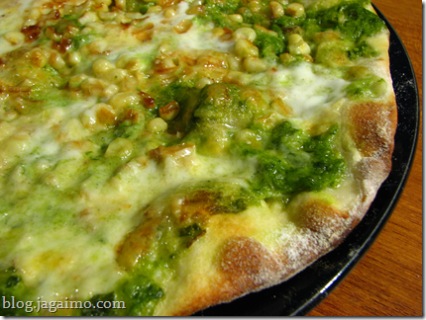 Even better, I also had some buffalo mozzarella, already open, which also has only a little time left, and some aged, intense gouda-like cheese whose name I forget.

Oddly enough, I also had an ear of corn that needed attention.

Although the carefully constructed menu of an "American" pizza place near my dormitory in Marburg, Germany, whose signature "American pizzas" almost invariably included either corn or canned mandarin oranges, might make certain people think otherwise, Americans do not put corn on pizza.

I've seen corn on pizza menus in Japan, Hong Kong, and Korea, but Americans do not put corn on pizza. The only time I ever ate corn on pizza was when we had lunch delivered from Domino's Pizza when I was on a business trip to Hong Kong about 7 years ago. Because that lunch involved the dual tragedy of eating mediocre chain pizza inches from hundreds of other culinary treasures, pizza with corn did not make a good first impression.

Never again would I ever have pizza topped with corn, I thought.

And then I made a small exception.

Thursday night I was out at one of Seattle's very few izakaya, and our table had at least two butter-shōyu dishes: one with renkon, or lotus root, and one with lightly sauteed potato shreds only slightly different from a dish previously featured. One we didn't order, for whatever reason, was "corn butter"... so I made up for that tonight.

I scraped all the kernels off my corn cob with a knife and sauteed them in butter, later adding a splash of soy sauce.

Originally I was thinking this would just be a nice little side dish. And then I did something that I'm not, by nature, inclined to do.

I put the corn on the pizza.

The mizuna pesto, like most basil or arugula pestos, featured garlic, olive oil, and pine nuts. It served as an excellent base, though I think it would be even better from mizuna a day or two fresher. I still don't know what possessed me to add the corn, but its salty, buttery goodness was not harmed by its appearance on a crisp foundation of pizza... and the herbal notes from the pesto were surprisingly complementary.

Corn on a sweeter base, such as more conventional tomato sauce, still seems bizarre to me, but I'd do this one again.