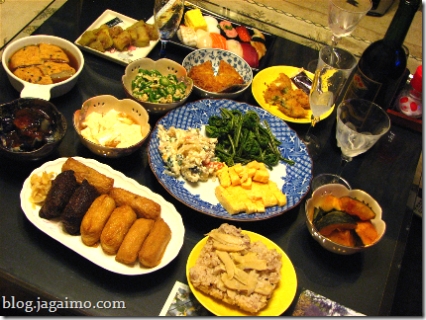 On a wet and rainy April 28, Hiromi, Hiromi's mother and I trekked to Meiji Jinguu, then briefly toured Shibuya's Tokkyu Foods Show depachika madness. We were planning to have dinner at Hiromi's home that night, so we actually wanted to pick up a few things to take home.

The nifty thing about department store basements in Japan is that you can assemble a fairly elaborate meal without ever needing to whip out a spatula or your handy kitchen saibashi.

Not one of the dishes required more than a bit of reheating, although for one of the two grilled eggplant dishes (far left, middle) I chose to make a quick nerimiso to help the two variations stand apart from each other. Even in that case, however, the department store had a ready-to-buy sauce you could take away to remove even this tiny step of production.

I also made a quick seasoned soup stock for the big ganmodoki (upper left), but everything else was just a matter of heating, at most, and plating.

Among the other dishes: Fresh yuba with soy sauce, an okra ohitashi with yuba, two kinds of vegetable croquettes, supermarket sushi, blanched kogomi (a spring mountain vegetable similar to warabi), a vegetable aemono, dashi-maki tamago (a broth-seasoned omelet), takenoko gohan (bamboo shoot rice), and four kinds of inari-zushi. One variety had a wasabi-seasoned rice, another was gomoku, another might have been made with azuki, and the last one had age puffs made from black soybeans.

It wasn't all easy, though... A fair amount of time unwrapping, plating and transporting foods from the kitchen to the table made preparation take almost as long as making a simpler dinner might have taken. Of course, the quality was much better than the average takeaway meal at a US supermarket, and everything was nicer than most of what you might find at even upscale urban specialty shops.