An Indian restaurant may not be the most obvious place to eat one's first meal in Tokyo.

But this is far from my first time in Tokyo, so I can dispense with the ambition to eat the best possible Japanese food every meal I have in this city. Tokyo is kind of a part-time home for me... Since 1999 or so, I've averaged very close to two Japan stamps in my passport every year, sometimes several weeks per trip.

Besides, the tempting Italian-Japanese fusion inches from our weekly mansion was completely booked for the night. It was already rapidly approaching 9pm, when most restaurants start winding down in Tokyo, so we settled for another small temptation just a few hundred meters away. 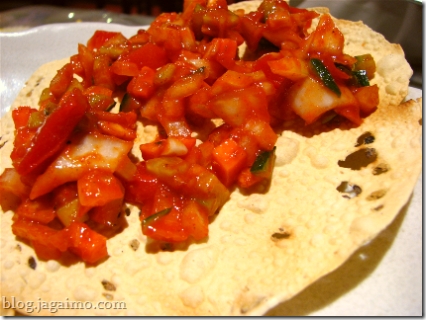 We ordered a pair of papadum, lentil-based crackers. Each papad was topped with marinated onions and other vegetables. 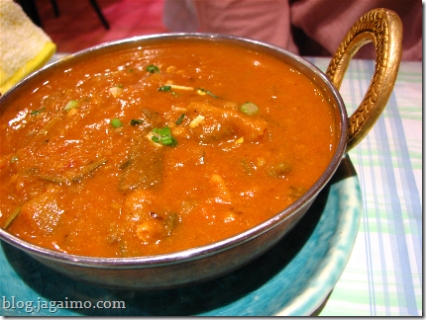 We were originally tempted to order a spinach dish but then noticed an okra curry on the menu. We've often had a simple okra and tomato masala, which we're huge fans of. This was a heavier dish with okra and potatoes along with a tomato-based sauce, which was not incredibly exciting, but was pleasingly comforting.

After a few minutes, we received another dish of what appeared to be the same okra curry, and we were told this was saabisu (free). We didn't quite expect it also to be studded with bits of lamb and chicken, but Hiromi made use of the animal bits. Based on the hodgepodge of ingredients, Hiromi surmised this was likely meant as part of the makanai (staff meal). 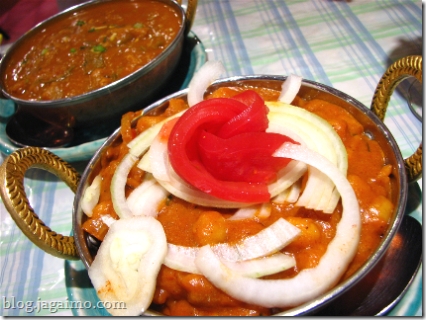 We ordered a chickpea curry as our primary protein source for the evening, which looks perhaps a bit similar to the okra dish but was fortunately seasoned somewhat differently. Sometimes Indian restaurants in Japan serve the same base for almost every dish, especially if they're financed by Japanese owners. This place doesn't seem to commit quite that sin, although there are only a handful of vegetarian mains so it's a bit hard to tell. 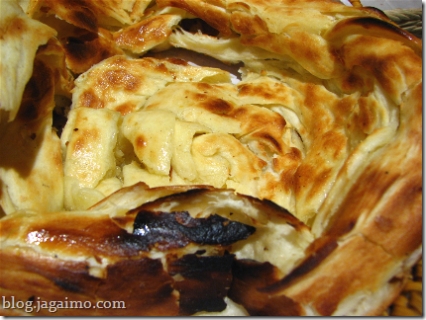 This is a little different than the parathas I'm used to, as the dough seems to be twisted into a spiral. It was quite addictive, though... After everything came, we did order a bit of an unremarkable saffron rice, partially because we never received any tori-zara to set small portions of food, and maybe partially because it didn't quite seem like dinner without rice. Like many Indian restaurants in Japan, they used expensive but texturally and aromatically inappropriate Japanese rice rather than basmati. I don't really know if this is meant to accommodate local tastes or if the import tarriffs on rice make real basmati too expensive.

We also had some inexpensive but rather mild "cocktails", one made with mango, and the other meant to be a gently spiked sweet lassi, which tasted suspiciously like Calpis brand syrup (we liked it anyway).

Anyway, we were reasonably pleased with our choice to eat here. The food was slightly above average for a Tokyo Indian restaurant, and the staff was exceedingly nice to us, even offering us a complimentary salad before the rest of our food arrived.

During a trip to Osaka in Japan about 7 years ago, I visited an Indian restaurant run by a friend of a friend, who confided... no... broadcasted... that he gets tired selling the same setto combo meals one after another to 80% or more of the Japanese customers who walk in to the restaurant. He said loudly, in Japanese, that people who order set meals get much more boring food and that people should try to be adventurous "like these two" and order various things from different parts of the menu, as it would be much more delicious. After his gentle tirade, the couple sitting next to us brustled a bit, and proceeded to order two of that night's setto specials...