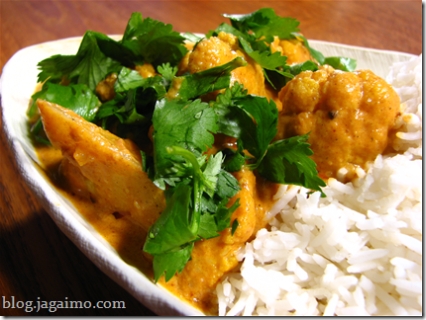 A simplification of a dish I sometimes make with mushrooms, this dum ki khom-inspired cauliflower dish features a cashew-based sauce with a hint of clove and cardamom. Seasoned with a fair amount of freshly grated ginger and a little garlic, It's dressed with a lot of cilantro, which provides a nice cooling effect. I added a tiny bit of palm sugar for this just to enrich the sauce. Instead of yogurt, I used a splash of coconut milk. Tomato paste helps provide color to the cashew sauce as well as a nice acidic counterbalance.

The dum ki khom dish comes from a Japanese-language cookbook by Renu Arora, whose instructions involve preparing the sauce separately from the mushrooms. However, cauliflower takes long enough to cook that I prepared the sauce right in the pan after briefly sauteeing the gobi in ghee, seasoned with garam masala, cumin, and a bit of turmeric. 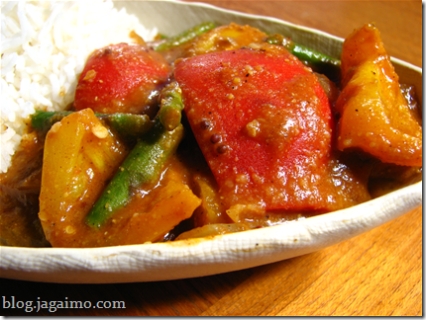 I wanted to use up some asparagus and take advantage of some cheap bell peppers, so I made a sauteed dish with a mustard seed-heavy sauce. To enrich the food with a bit of protein and to make the sauce a bit thicker, I ground some white urad daal up in a spice grinder and cooked it into a sauce with a bit more tomato paste. I used some whole mustard seeds, garlic, and onions as the dominant notes, and I think I used a bit of fenugreek and cumin as well.

This week I was a little heavy-handed with tomato puree, but both of these dishes like their tomatoes.