You wouldn't know it yet considering how much I'm still focusing on my Japan trip (just a few more things to write about...), but I've actually been back home for a couple of weeks already. I've been eating fairly simply most of the time, but perhaps a bit unhealthy. 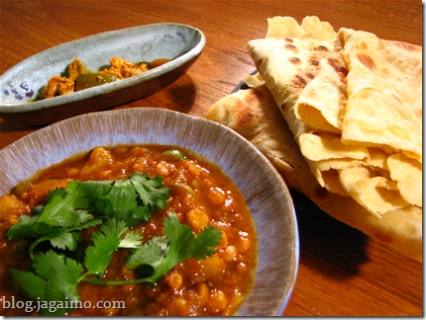 After a week full of bread, cheese and asparagus, I was craving something hearty and dense.

I thought it might be fun to try my hand at some crispy flatbread. I'm a fond of roti canai, the flatbread served with a simple channa masala or even a "gravy" made with chickpeas. But I thought it would be nice to give the dough itself a bit of a protein boost, so I used half all-purpose flour and half besan, or chickpea flour. I add a fair amount of ghee and  a generous pinch of salt, combine the flours, and add just enough warm water to create a smooth, pliable dough. The dough needs to be rested for a half hour or so. 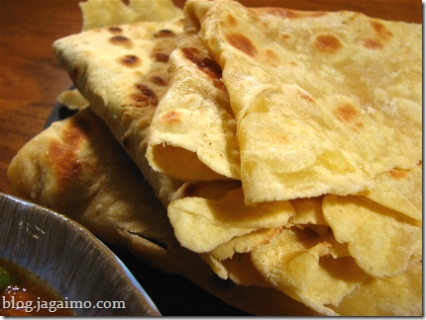 I cooked them on a big, hot, cast-iron skillet until they were puffy, lightly brushed each side with oil and cooked each side a bit longer. Then I folded each roti over twice so that they become pie-shaped wedges.

They weren't quite flawless, as the edges are a bit rough, but they came out just slightly crispy and the chickpea flour added a nice flavor.

I didn't really know this until looking up other roti recipes after I was all done with this dish, but some versions of besan roti add spices right in the dough. However, I was mostly looking for a structure to serve with dal, rather than something with its own complex flavor. 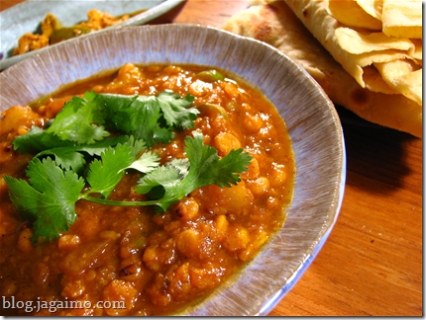 I made a simple chickpea dish seasoned with an onion jam (caramelized onions with added liquid), tomato paste, fresh ginger and garlic, turmeric and chilies, along with an explosion of ghee-cooked spices including cumin seeds, mustard seeds, coriander, and a garam masala blend. I take this ghee-cooked spice blend and pour it over the soup when both are very hot, causing furious frothing and bubbling, and allowing the aromas of the spices to spread throughout the dish.

The chickpeas come split, and don't take terribly long to cook. I also added a few potatoes about 25 minutes before I expected the dish to be done.

Upon serving, added some cilantro to add a fresh, cooling flavor. 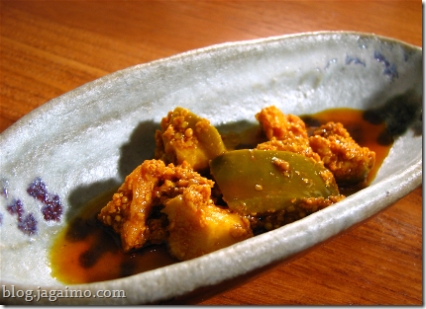 The mango pickle is nothing special... just a store bought thing, used to provide a little tangy contrast... It goes well with the besan roti as well, but I later discovered that the local-to-Seattle Taaza's tomato garlic chutney, by Sunita Shastri, is particularly good with the roti.

I have been craving spicier food the last few days, so I think this won't be the only South Asian food on my table this week.