Working in a minimally-stocked kitchen that's completely different than your own is pretty tricky.

Our weekly apartment was equipped with a rice cooker, a saucepan and a frying pan. We had a few plates and bowls, but nothing close to what I'm used to at home.

But after a bunch of elaborate, not to mention expensive, restaurant meals, we wanted to make something on our own. 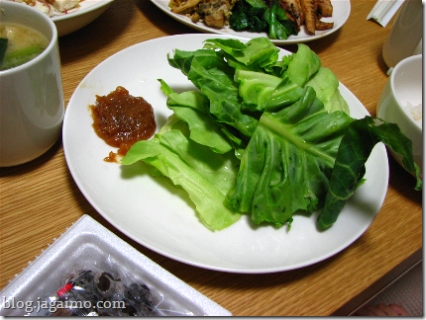 We have spring cabbage made with a quick homemade sweetened miso... this is sort of a typical izakaya dish nowadays. We soon discovered that the lighter colored leaves from inside the cabbage were much more tender, and decided to reserve the dark outer leaves for an itamemono on another day.

Three nice side dishes made ugly 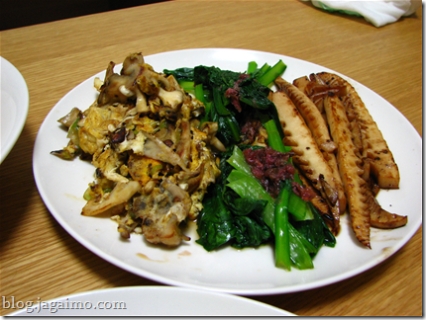 We didn't really have all the fundamentals... just mirin, soy sauce, salt, pepper and instant dashi. We had no vinegar, and we had only a small amount of miso. We didn't actually have any cooking oil; just some butter, meant for toast for breakfast.

I normally don't use instant dashi since it's not vegetarian, but when I'm on the road and only cooking a few meals on my own, it's a bit harder to stock a bunch of konbu and dried mushrooms, so we relied a bit on a few granules of that dashi for a few things. Although I'm not really a fan of the flavor of instant dashi, some dishes just don't taste right if you only use water. Since I already have to relax my vegetarian habits when eating out in Japan, I elected to make another small concession to reality, and I used small amounts of it in one or two dishes.

Since we only had a few plates, elegant platings had to be sacrificed, but we found some sort of solution.

Our side dishes included, from left to right: An egg scramble with some cheap maitake mushrooms and leeks, an ohitashi made with sakura no shiozuke, or salted cherry blossoms, and grilled bamboo shoots with butter and soy sauce. They may not look like much, but everything turned out slightly better than I expected. 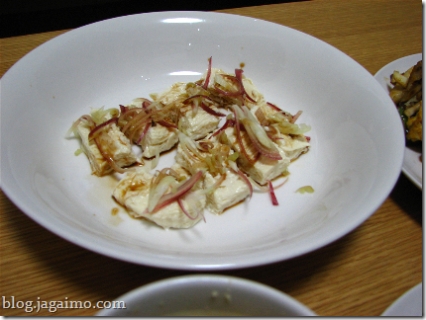 We love myouga, sometimes explained as ginger shoots in English, and it's hard to get in the US. Myōga looks a bit like the bulb of a shallot but has a gently spicy mild ginger flavor. I sliced some with the scary, flimsy knife supplied by our weekly apartment and scattered the slices inelegantly atop pieces of cut yuba, and carelessly drizzled some soy sauce over the yuba.

I miss fresh yuba when I'm in the US. The best I can do is dried or, on rare occasions, previously-frozen... unless I'm willing to commit to sitting in front of a nabe for an hour or two as I slowly peel off pieces of yuba from simmering soymilk. I don't do that so often. 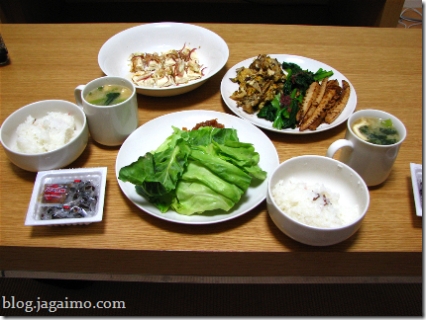 Hiromi prepared a miso soup, which I nearly ruined by adding too much instant dashi. Since I never have any instant dashi at home, I didn't know how much is "normal" for soup. It turns out that the answer is very little.

She also blended some more salted cherry blossoms into the rice to make sakura-gohan, and whipped out the kuromame nattou (black bean nattō) before I could blink.

After a really fancy lunch in Omotesandō, this more humble dinner helped us balance our extravagance without feeling like much of a sacrifice. 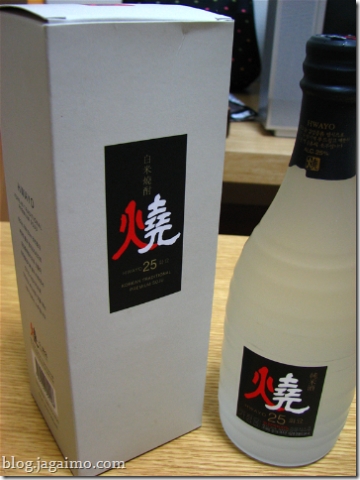 I had bought an "expensive" bottle of soju while in Korea at about KRW 11,000, or $11-12. The mass-produced stuff like Jinro and Chamiseul goes for less than $2 a bottle at your average convenience store, so this would be considered a bit extravagant. Anyway, tonight we cracked open this bottle and each had a glass of Korean shochu on the rocks with our dinner.

It's smoother and cleaner-tasting than the mass-produced brands, but not quite as nice as the better Japanese varieties of shochu. The flavor is relatively neutral  but still has a hint of complexity. I'd buy it again if I were in Korea.