Omotesandō is a very brand-conscious, upscale, fashionable district in Tokyo. It's home to boutiques by Pierre Hermé, La Maison du Chocolat, Louis Vuitton, and Hanae Mori, among others. It's part of Minato-ku, one of the most expensive wards within Tokyo.

A few years ago Hiromi read something about a fancy crêpe shop in Omotesando serving galette, or buckwheat-based crêpe, an idea which fascinated Hiromi. In Seattle, where savory crêpes are less unusual, they're a bit easier to find, but most of Tokyo thinks of crepes as a street dessert food for Harajuku-haunting junior high school girls.

We wanted to go out to brunch after returning from Aomori, and Hiromi was in the mood to revisit Le Bretagne, the crêpe shop in question, so we made our way to Omotesando without bothering to look it up, as Hiromi was sure we could find it by memory.

As a rule, if you aren't living, working, or regularly shopping in a particular neighborhood in Tokyo, don't ever make this assumption. We were quite on the wrong side of things, and only with a bit of expensive fancy web searching on my rental cell phone (thanks Softbank Telecom!) were we able to locate the address and realize the error of our ways. 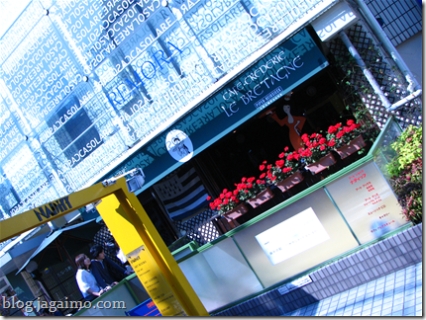 If you aren't already familiar with Tokyo, you need to know two things: 1) it is easy to get lost in a city full of small alleys of which you have only the vaguest memory, and 2) none of said alleys, or even minor streets, have actual names. Only fairly major thoroughfares and highways have meaningful designations. People in Japan give directions almost entirely using landmarks and notable features. 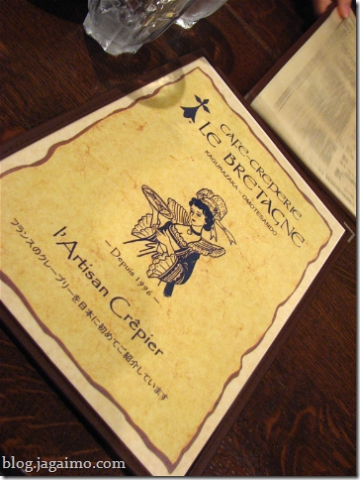 It took a while to get in... On a sunny Tokyo day when everyone in the city with a non-service industry job has the day off, the place was packed, and we had a 20 minute wait to be seated even after our long odyssey. 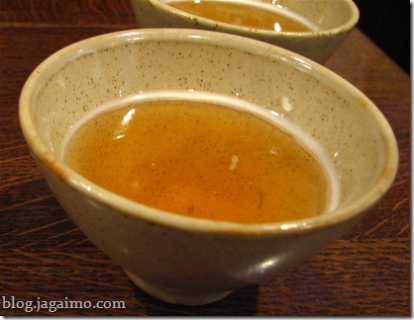 It was brunch, but we wanted a little taste of sparkling pear cider, which is fermented much like beer and has a similar percentage of alcohol... 3-6%, depending on variety. The small cups let us taste without feeling overly indulgent for early afternoon. 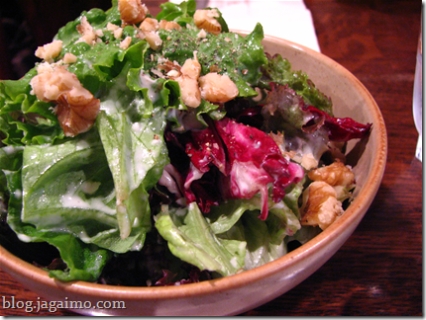 Hiromi loves blue cheese, so we decided to order a little side salad made with roquefort and walnuts.

Both of us were somehow craving eggs... Except for a great chawan mushi at the last onsen where we stayed and that fantastic egg cooked in a shell, I guess we just hadn't had our fair share of ovoid cholesterol delivery vehicles of late. 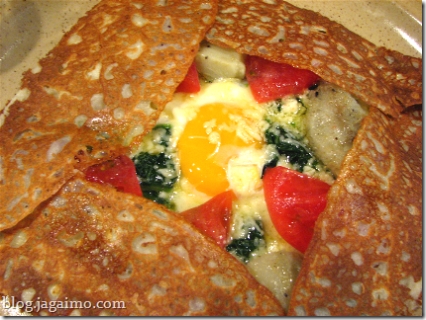 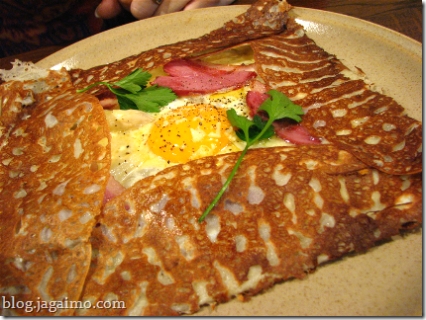 As you'd expect, I had the vegetarian thing and Hiromi had the ham and cheese.The nice gently fried egg helped pull the galettes together. The texture was crispy and the taste was nutty, and the filling was pleasingly decadent. 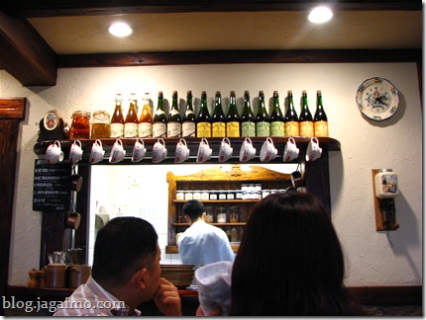 After skipping breakfast with the intention of doing an early brunch, then walking around hopelessly lost until our early brunch turned into a fashionably late lunch, we were still craving a bit of dessert. On our previous trip here three years ago, we were satisfied with a single rhubarb-orange dessert crepe, also made with the buckwheat flour, shared between the two of us.

But this time, we were a bit hungrier. So both of us ordered dessert... 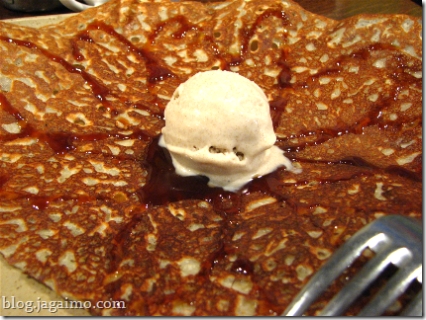 My dessert was this buckwheat crêpe served with a buckwheat ice cream and drizzled with buckwheat flower honey. As expected, the texture and flavor of the crêpe was nothing short of spectacular. The ice cream was interesting and I've been known to use a bit of buckwheat honey myself, but the overall impact comes across as just a little bit healthy... nice, but not overly indulgent.

And then I tasted this... 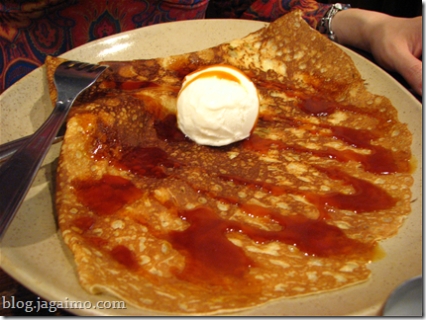 Oh. My. God. It could inspire religion in the hardest-core of agnostics. It alone serves as proof that the divine exists right on this little green planet. Hiromi jealously guarded this, but I definitely stole my fair share... This had the most fantastic caramel sauce ever... a little buttery, and apparently a little salty, and very deep and rich in flavor. I didn't know it was possible.

The ice cream was simple and creamy and made with remarkably good milk. It provided just the right balance to the intensity of the caramel.

Thanks to our self-indulgence, we ended up with an extravagant JPY 9000 lunch ($80-90). A similar lunch (though not quite at the same level of quality) at one of Seattle's few crêpe  shops wouldn't have gone for much more than $50, but somehow, in Omotesando, where madamu go to spend their mid-level executive husbands' excess income on lunch and shopping, it seemed just like another day... and not a yen wasted.