I don't really know what these little cakes should be called, but in Germany something similar was called a Frikadelle... traditionally something like a flat meatball, but sometimes an alternative version was listed the token vegetarian dish at the university cafeteria. 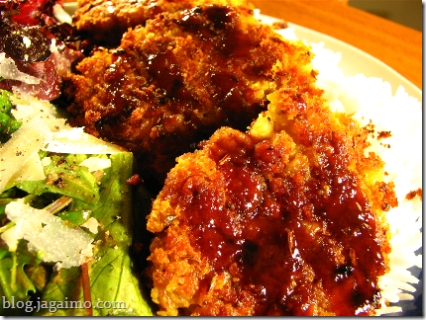 These were my first home-cooked meal after returning to Seattle from Japan... I really didn't have much in my refrigerator, and only arranged to obtain some lettuce and a little Manchego cheese on my way home... The rest depended on my pantry.

I just crushed canned cannelini beans, added some masa harina (ground cal-treated cornmeal), salt, chilies, and some shallots sauteed with cumin, mustard seeds, and a little turmeric for color. I formed three small patties and pan-fried them until crispy on both sides.

They're served on rice with some tonkatsu sauce and a simple salad with Manchego cheese.

It sounds offensively fusiony, but tasted surprisingly decent. It also took only about 10 minutes of effort (and some cooking time)... and the corn flavor worked pretty well with the cannelini. I had planned to use canned black beans or pintos, but none were handy; fortunately, the slightly sweet flavor of the cannelini worked to a small advantage.