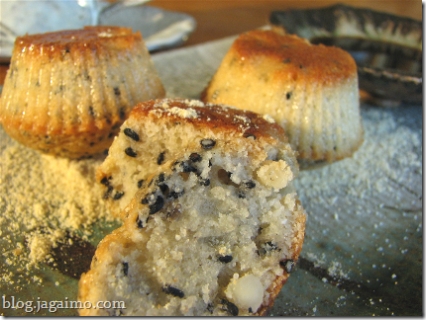 Until a little trip to Licorous last fall, I had never thought much of financiers. I don't know why... maybe I never had a good one. I don't have much love for madeleines either.

But Licorous' financiers were just too hard to resist...  Served warm with an espresso caramel dipping sauce and another dipping option, perhaps a bit of warm maple syrup, the crisp-yet-tender brown-buttery goodness continues to occupy a place in my dreams.

At home, I rarely make financiers... as much as I love butter, there's only so much I can handle. But I've been tempted to reinterpret the financier with a wafuu approach, and so I have occasionally been trying my hand at them recently.

For my first attempt at making Japanese-styled financiers, I replaced all of the standard ground almonds with ground white sesame seeds. It turns out that the almonds add some flavor foundation that a pure sesame seed version doesn't supply, so I've since tweaked my recipe.

This version is based on Dana's financier recipe on Tasting Menu. When I first saw this recipe, I thought the amount of sugar was incredibly high and that this would be unbearably sweet, but it somehow works out to be just about right, and is much less sweet than I expected. Perhaps the bitterness of the nuts helps balance out the sugar.

After baking, rest on a cooling rack for about 10 minutes. If you used a larger form, use a bread knife to cut the financiers into smaller cubes, but you may want to cut them a bit sooner so that they don't steam themselves soft. 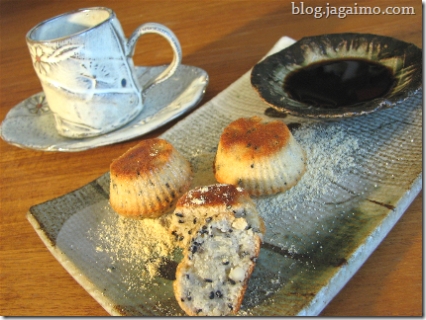 These are perfect dipped into a little kuromitsu, a bittersweet Japanese black sugar syrup. Failing that, consider blending some molasses, treacle, or sorghum syrup with honey to taste; try blending about 80% sweet molasses and 20% honey. I dusted a little kinako (toasted soy flour) seasoned with sugar and salt onto the plate, which also adds a nice flavor and makes the dish even more wafuu.

I served mine with a little espresso... A sturdy tea would work as well.