It's totally out of season right now, but even during inappropriate times of year I can't resist nasu-no miso-ni. 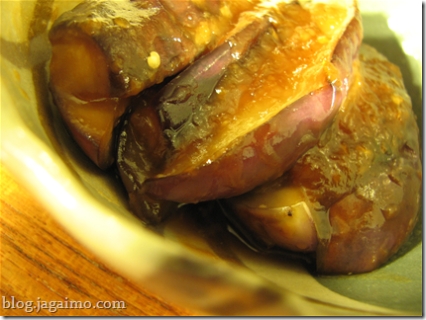 I'm somewhere in the middle, though I'd say my I was pleasantly suprised by one that a friend's mother made in Ube, Yamaguchi prefecture many years ago, and it made me realize that the variation I had been making was heavily influenced by the recipe author's Akita heritage.

Ever since that Yamaguchi experience, I've added a tiny bit more sugar, a bit more mirin, and a little less miso to my version of this dish.

This time I made the dish with tiny Indian eggplants that remind me of the eggplant of Kyoto, or Kyo-nasu. They're only two or three inches (5-8cm) long.

I gently rub the lengthwise-quartered eggplants with a little salt, let them rest a few minutes, then briefly soak in water to remove any aku. I then add the eggplants to a hot pan with a little vegetable oil, trying to partially sear the flesh. I then add miso, sugar, mirin, and a little soup stock, and braise until the eggplant is thoroughly coated. You can adjust proportions to taste; I like both salty and sweet-savory variations.

Some variations of nasu-no miso-ni actually involve deep frying the salted eggplant, which is great, but unnecessary if the eggplant is slightly seared. It's a little trickier to get the timing right if you use a saute pan, but probably uses a bit less oil.

Frequently you'd top this dish with a few sprinkles of sesame seeds (either black or white will do), but when I ate this I had at least two other sesame flavored dishes, so I skipped it. You can eat it all right away, like the more general category of nimono it actually improves a bit with a day or two in the refrigerator.

In Japan, people consider the best time for eggplant to be early fall... Of course, it's usually primarily a summer vegetable in Europe, the US and most of China. I often try to find my way to Japan in September just so I can eat aki-nasu, or fall eggplant.

(OK, maybe that's a little bit of an exaggeration... but no, it's truly worth it).